The video for this part (please set to 1080p quality / full-screen mode):
https://youtu.be/WmYCDzD87uc 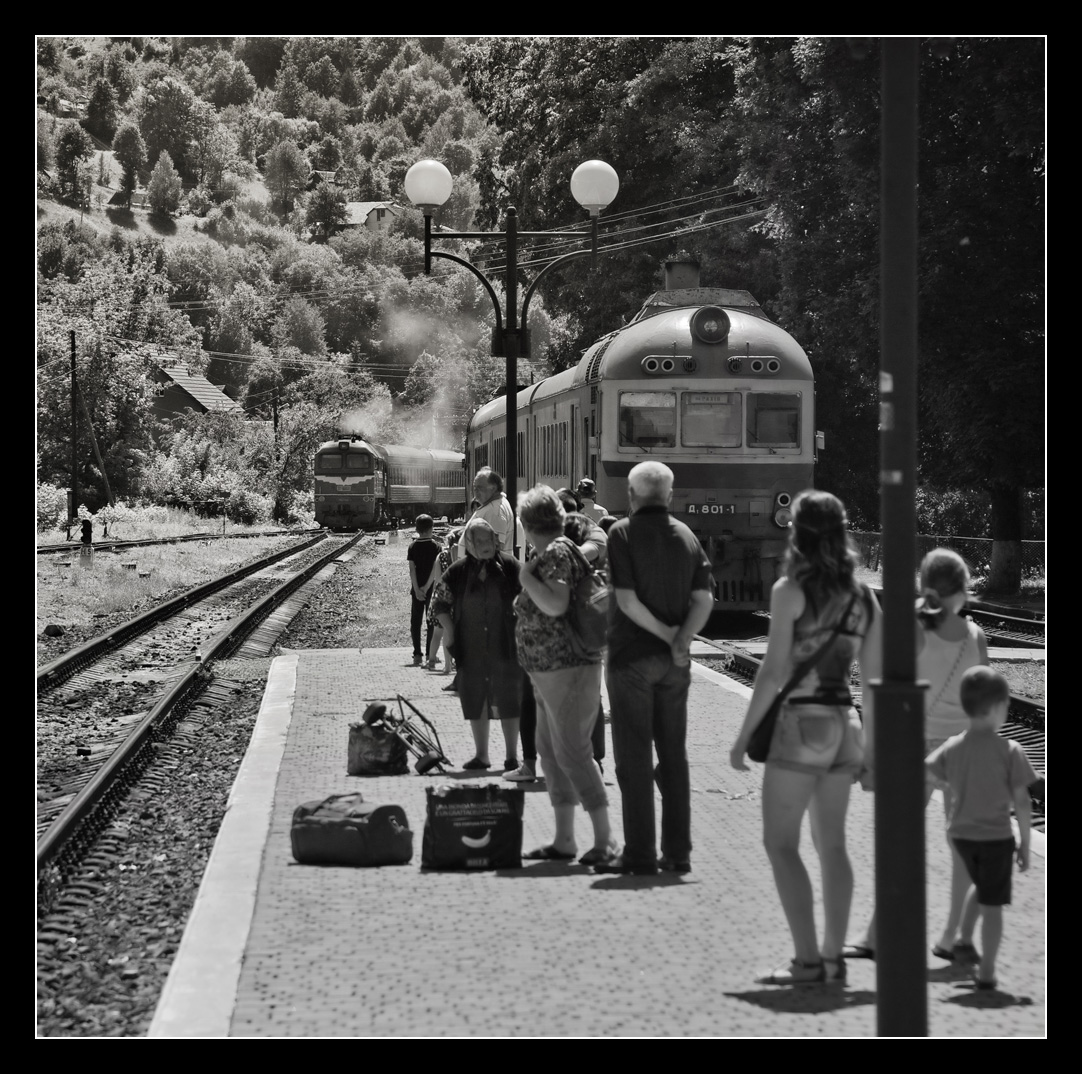 We say good-bye to the current terminal of the diesel branch line through the Carpathians, into the background it would have continued towards Romania.

The narrow interior of a platskartny-coach - as the adapted German name says, the lowest overnight express class in the former Soviet Union is meant for trains with reserved berths. The entrance was only open on one end, clearly it is just suitable for a limited number of passengers when used for local traffic.
I got a seat in the first compartment behind the loco. Opposite me sat a grandmother and her granddaughter chatting non-stop the whole 3-hour-ride. If not with each other, grandma called a neighbour on her mobile telling her that she just went through the Carpathians on a train... ;-) 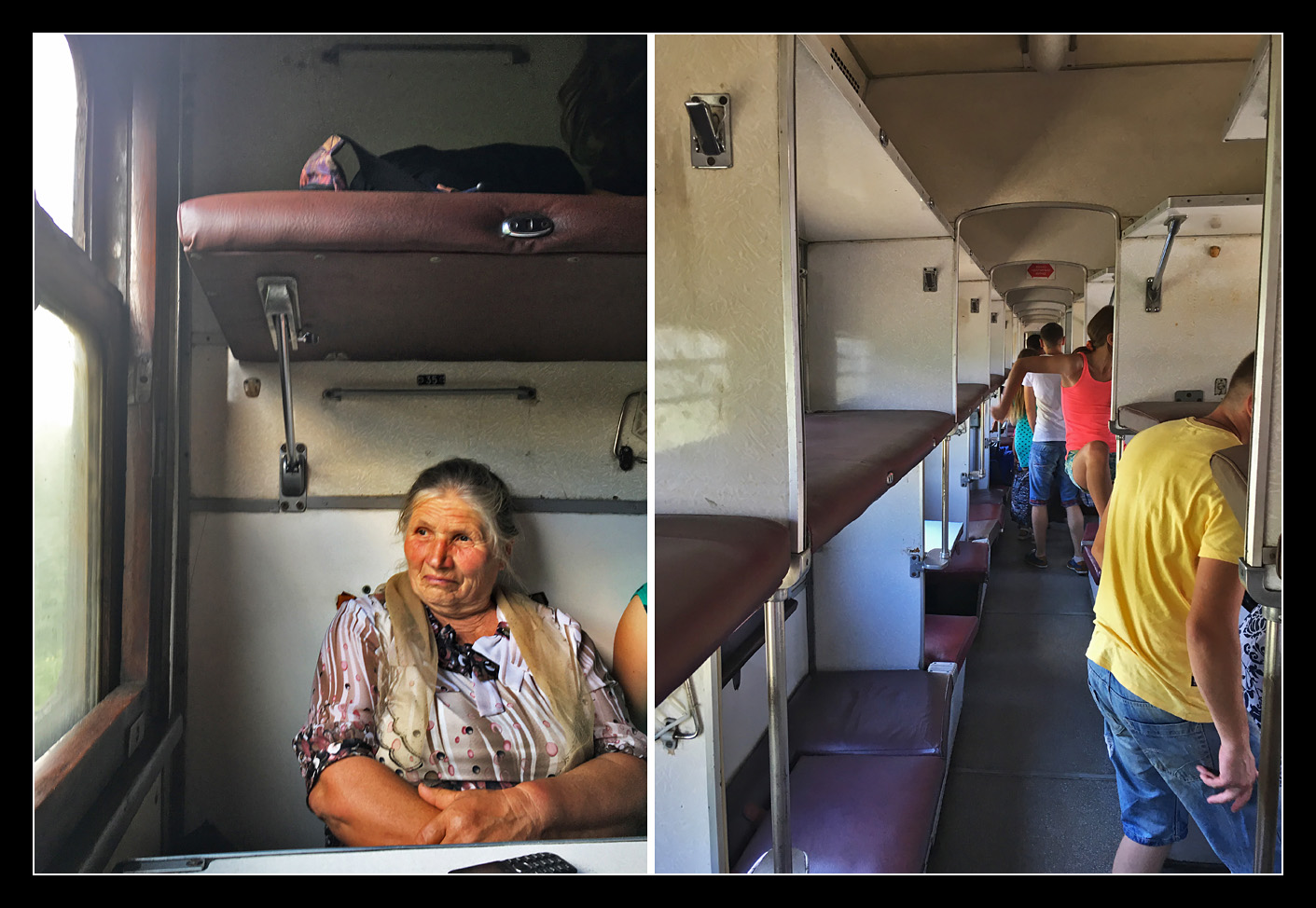 Our train departed punctually, then crossed Tisza River several times on tall bridges in the narrow valley and stopped at the first of only few halts. The ride behind the smoking class M62 can be enjoyed in the video from minute 10:40 - even if the constant chatting sometimes can be heard. 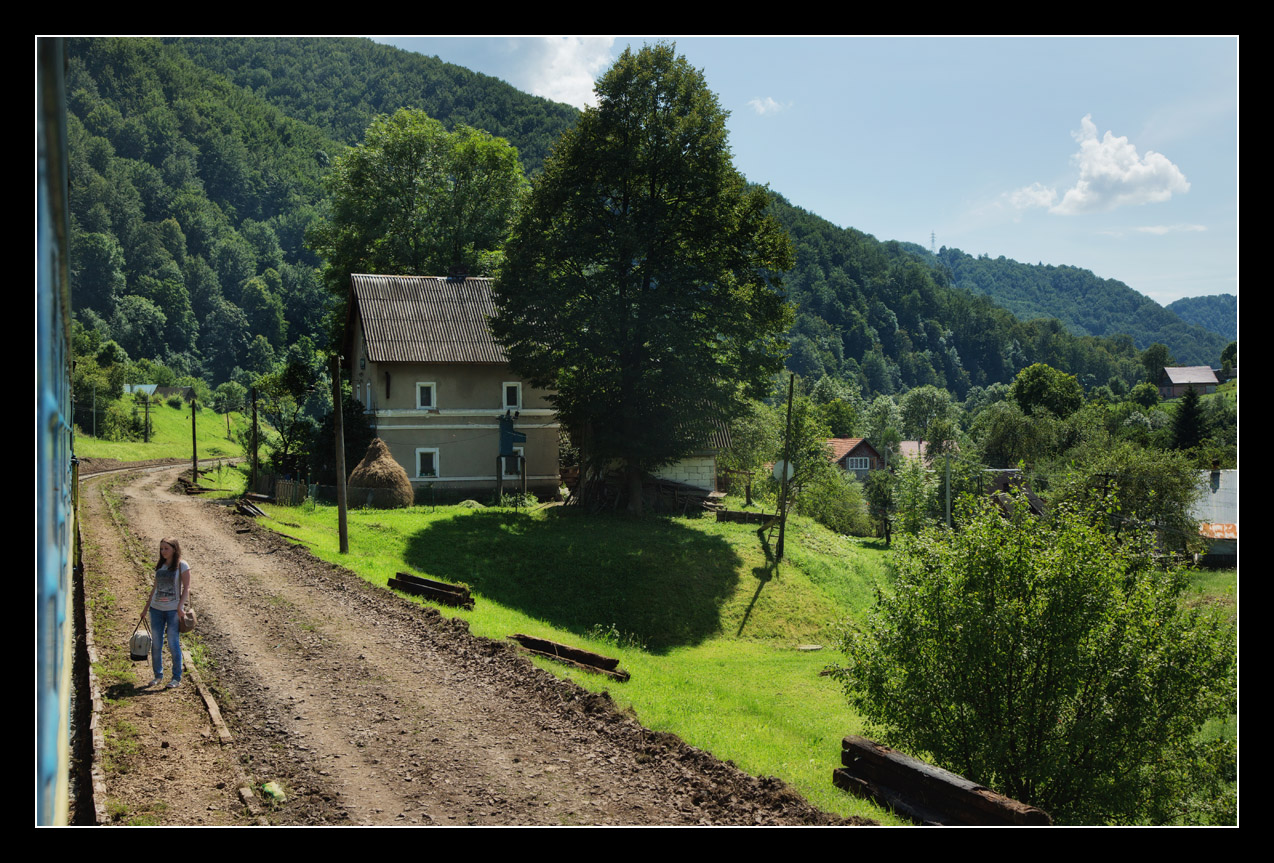 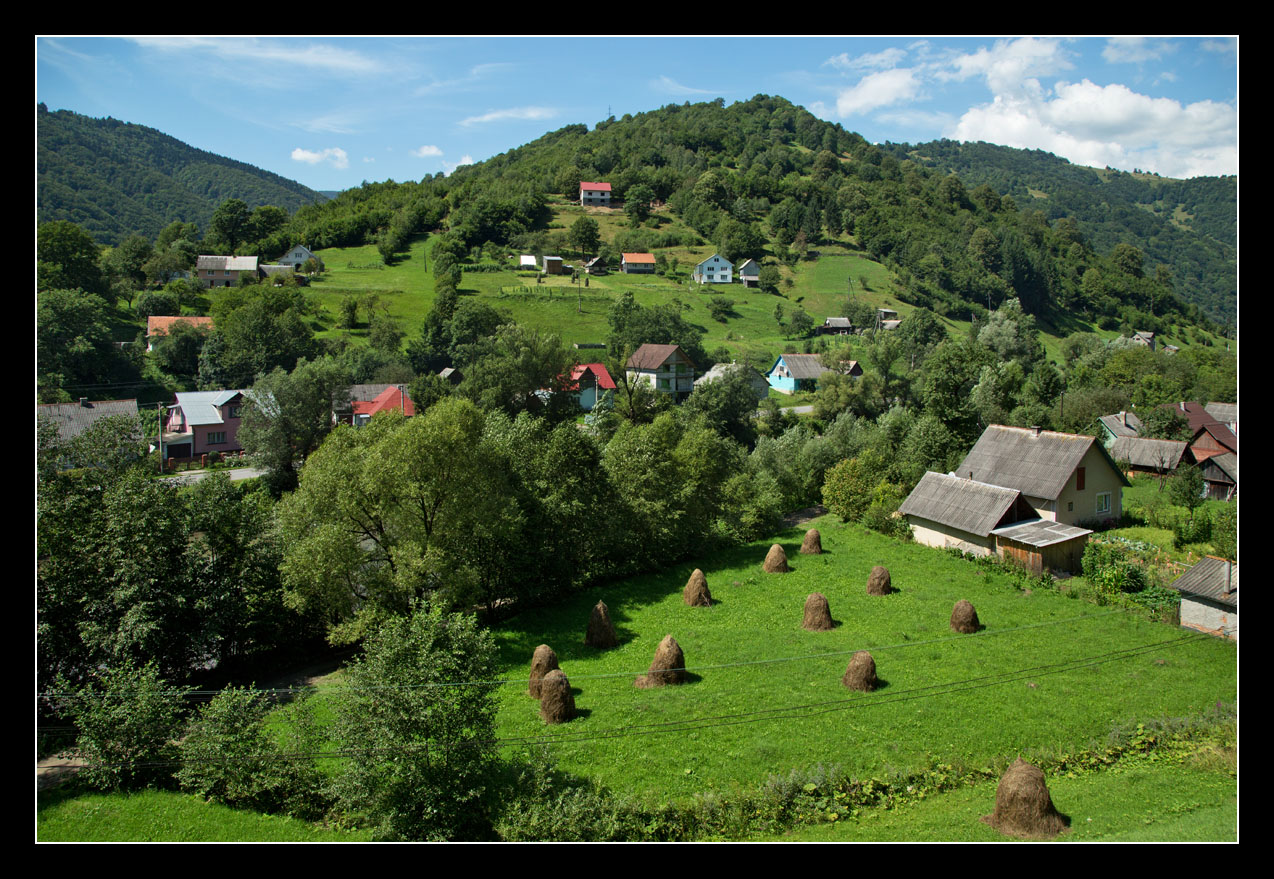 A pair of storks in a nest made of tree roots. 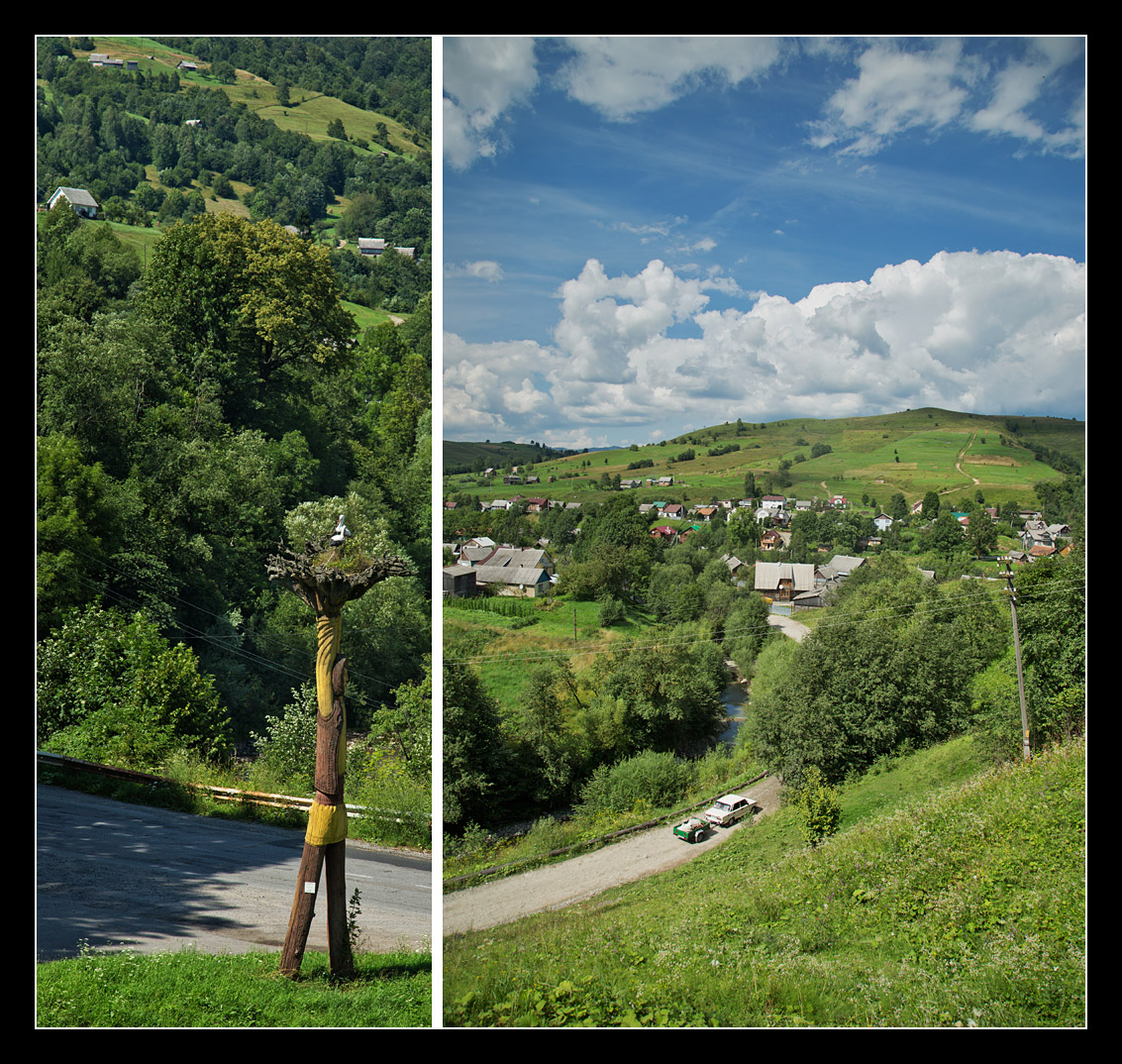 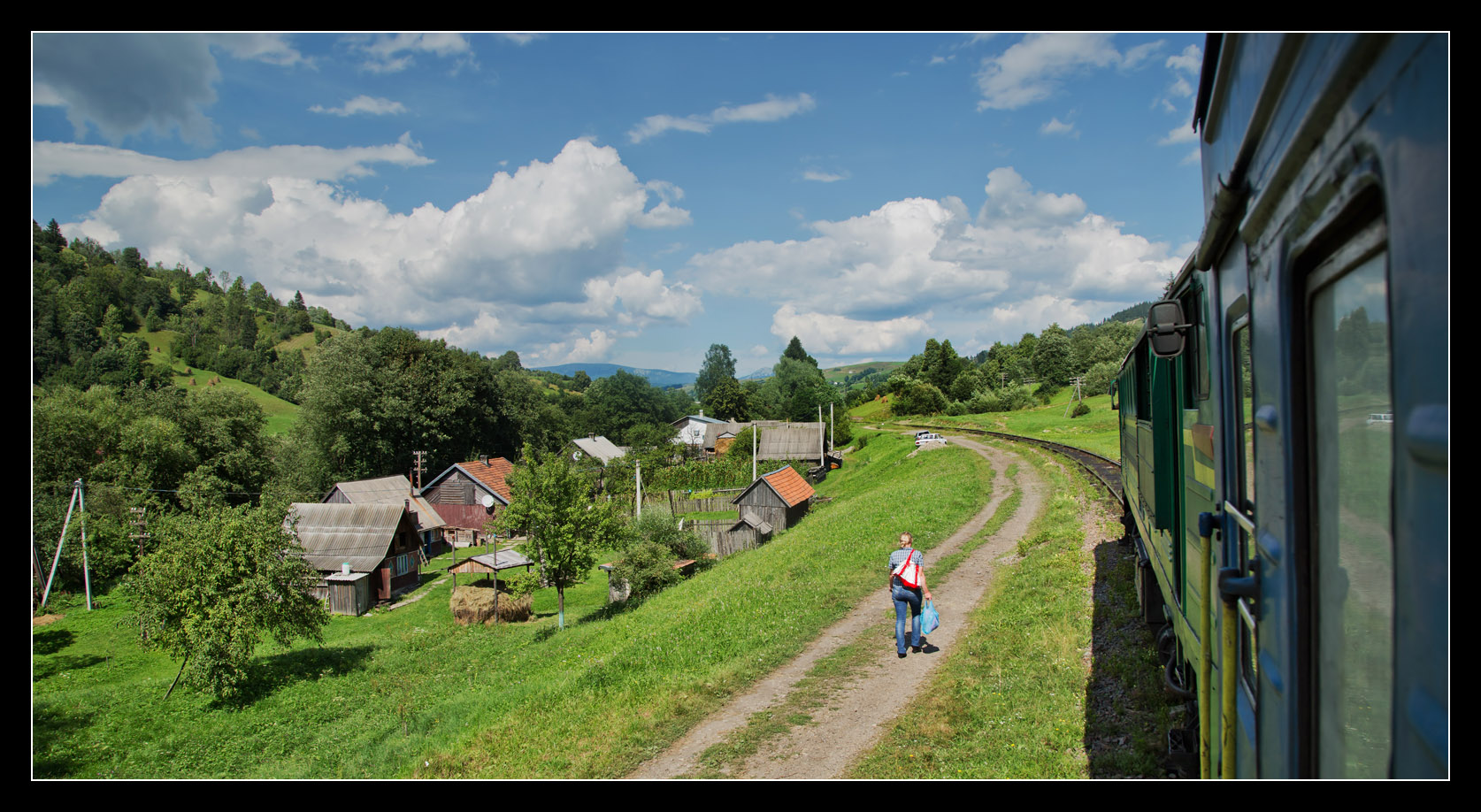 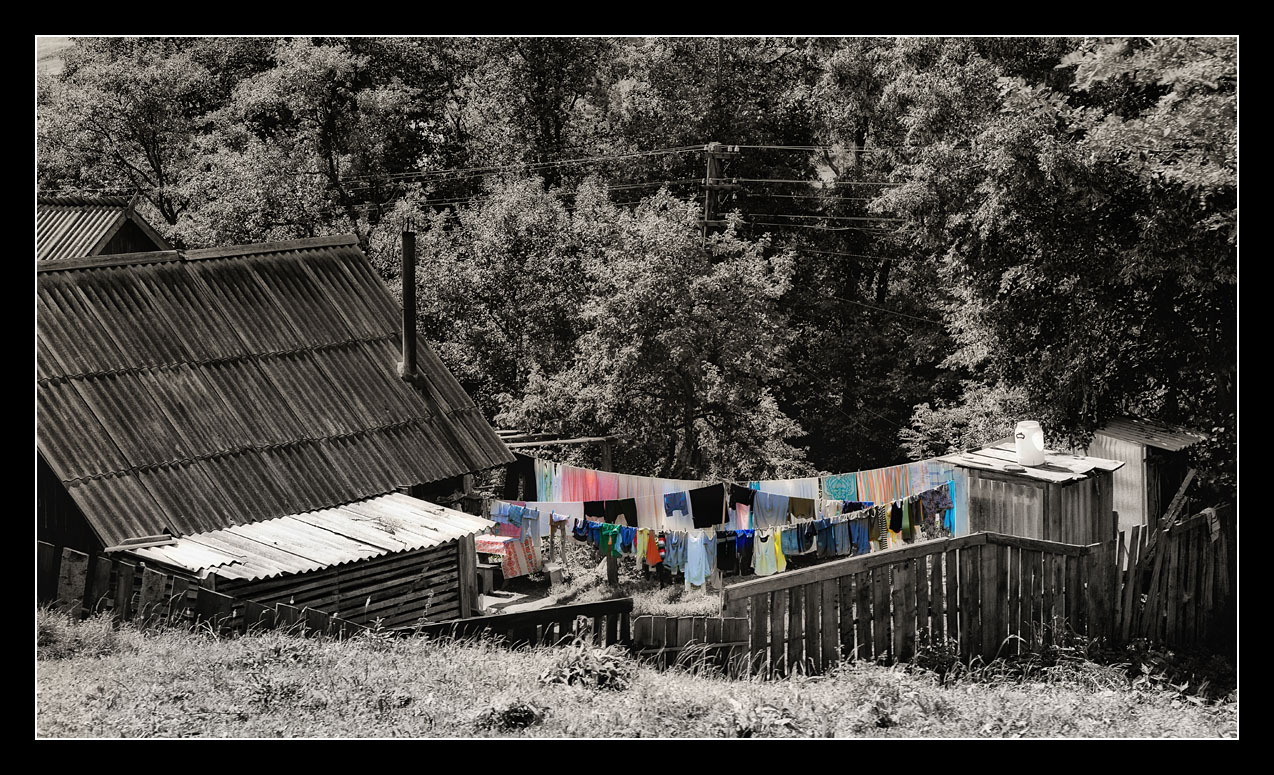 We approach town of 8000 inhabitants Yasinia, the large building in the background is an artificial fur factory. 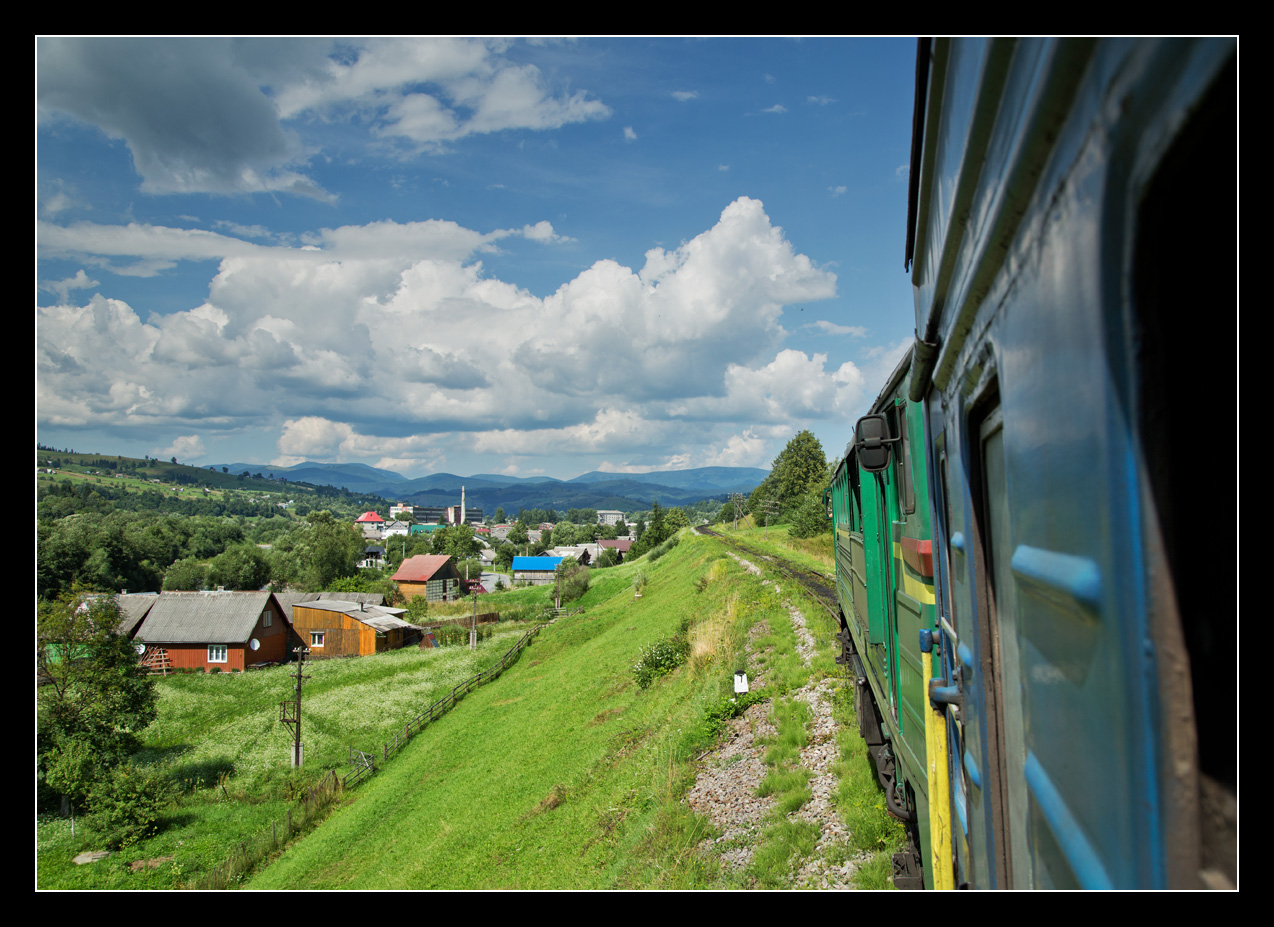 Thirteen years ago, six of my family went on a week-long tour of Western Ukraine. However, we left Lviv not with a view of a class M62 heading the train, but in a Volkswagen minibus (then brand new, bought for 5000 dollars - but who could afford anything else in the Ukraine?) owned by our driver Bogdan, a lovely, well-behaved man who soon was adopted as seventh family member. He had been around whole of Europe as driver, so spoke other languages, too. Also, my father as a Russian professor talks like a native (sometimes gets confused for one ;-)) and authored the book "Negotiating with Russians" - that's why it was possible to communicate with people throughout the country on an entirely different level than would be possible as regular tourists.
The first leg of the journey led us to an overnight stop at Yaremche (see following report). 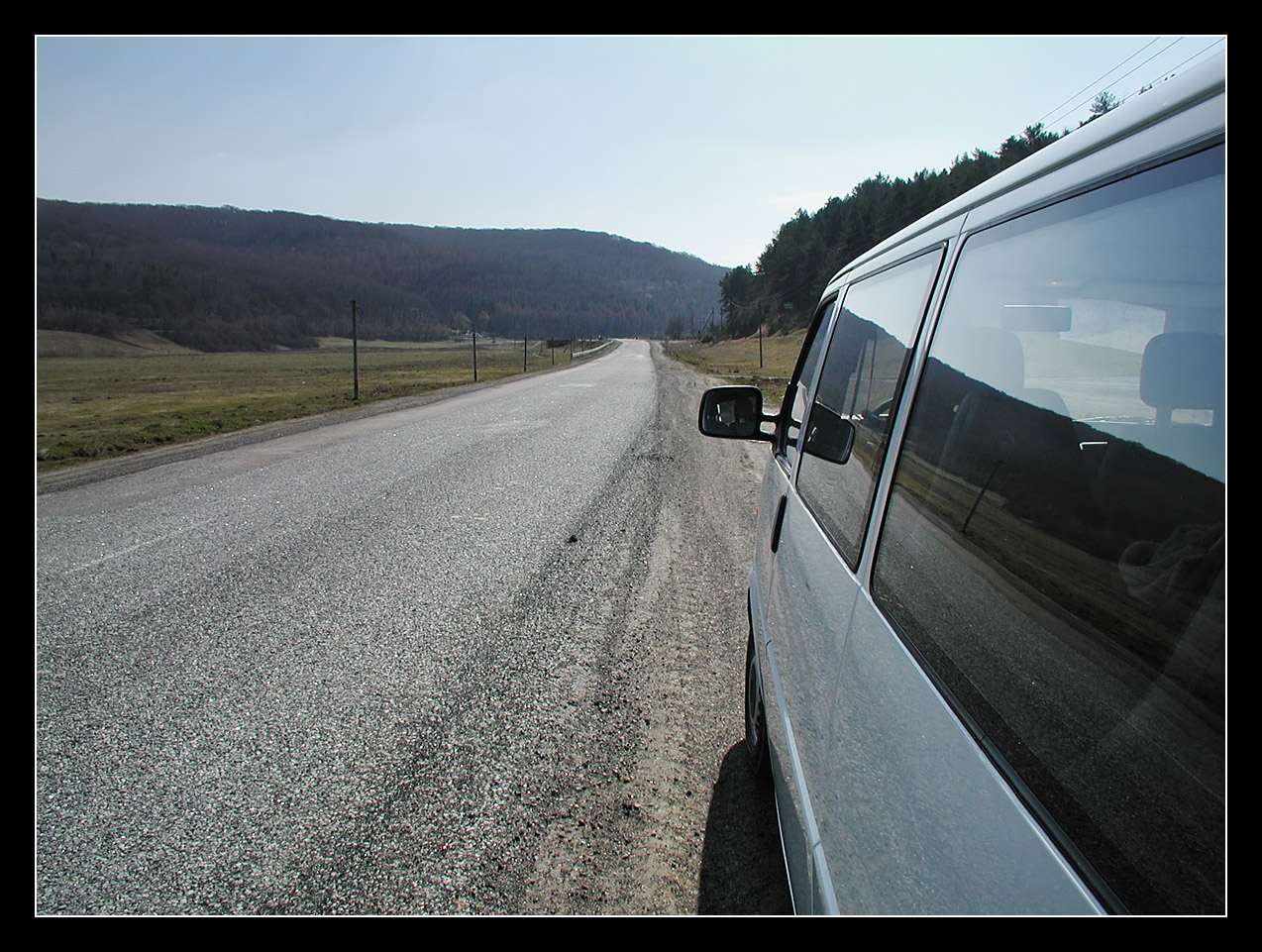 Next morning, we did an excursion further into the Eastern Carpathians. 3050 feet high Yablonitsky Pass (also called Tartar Pass) separates oblast (administrative region) Ivano-Frankivsk from oblast Transcarpathia (where we have travelled through in the reports until now) and the headwaters of the Prut from the headwaters of the Tisza.

Once more we have entered an area inhabited by Hutsuls (already known from my Moldovita-travelogues). At Yasinia, the Ascension- or Strukivska-Church from 1824 is one of the best maintained examples of wooden religious architecture, receiving UNESCO world heritage status in 2013. But first Tisza River has to be crossed to get there...

View over Yasinia, the station is located next to the large church.

Back then my railway photography consisted of the things I captured by chance: A class D1 DMU smoking away towards Rakhiv, still sporting a dark red livery!

The iconostasis has been kept in original state, icons newly overpainted. But even this preservation is rare in a world of wooden churches which constantly have to be renewed. 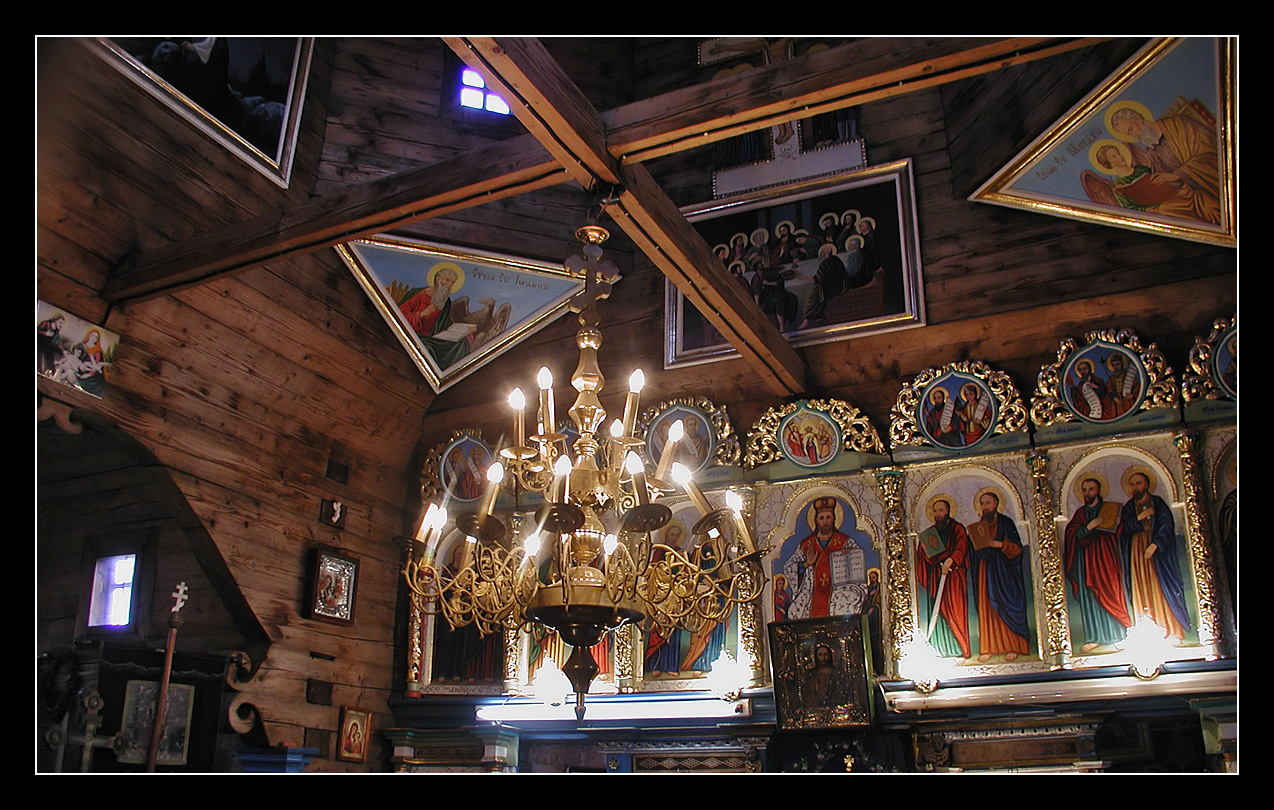 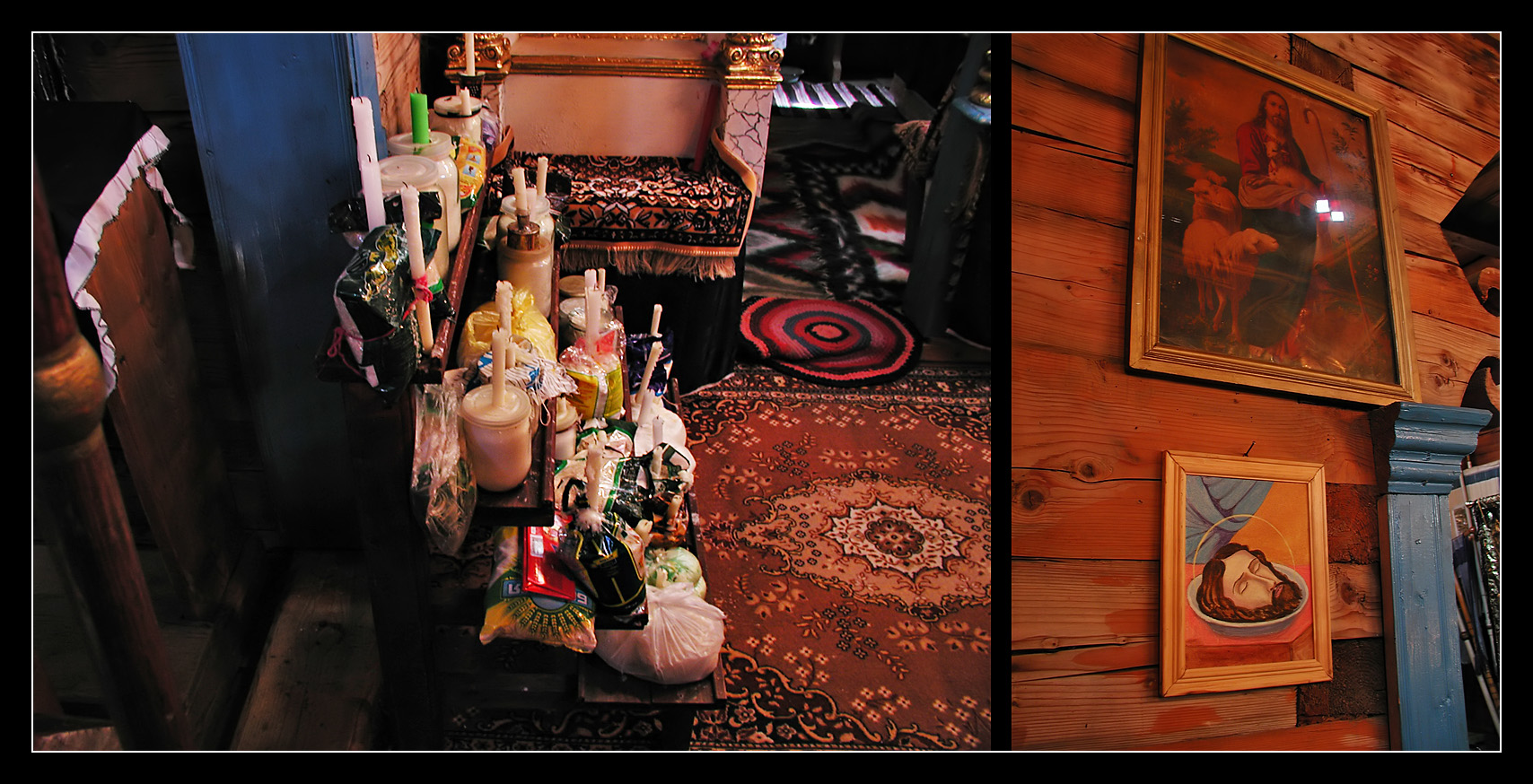 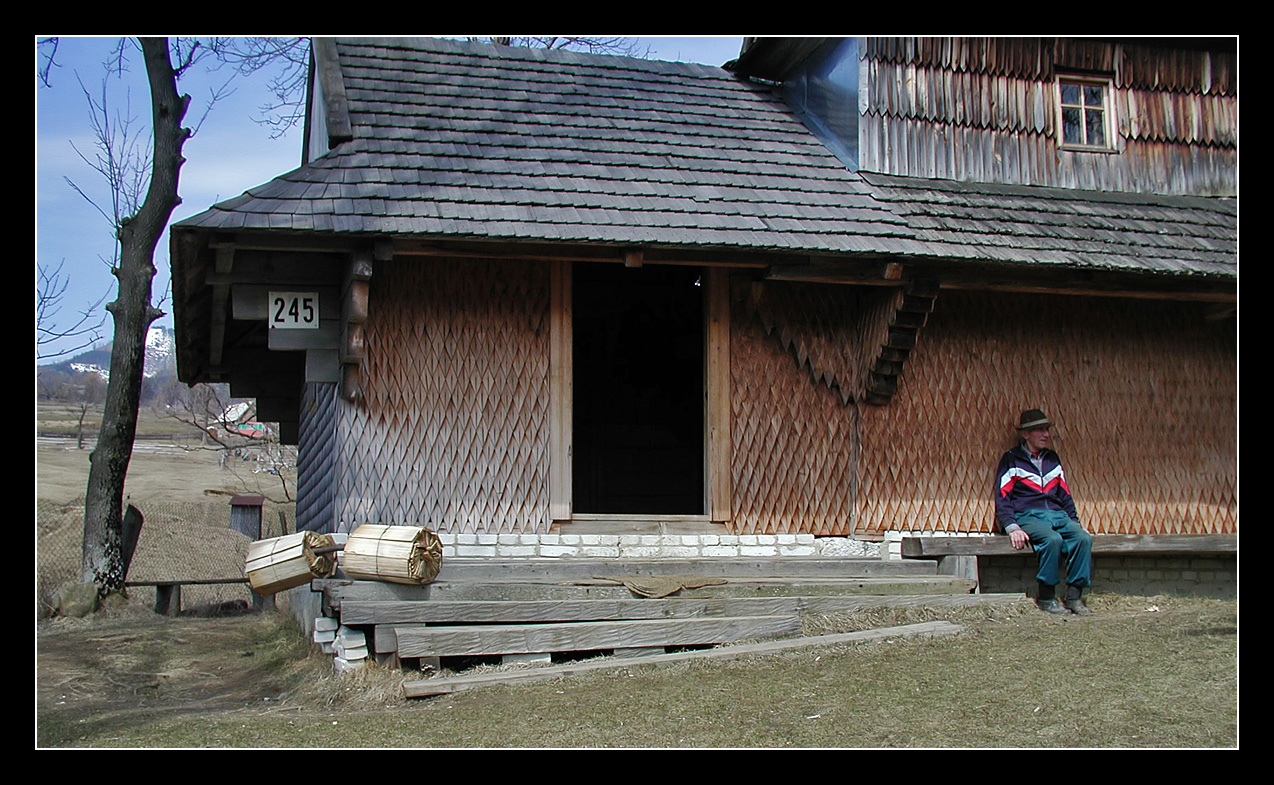 Market below a ski lift and the railway line.

To the left hardly any non-Soviet detail can be spotted.

An Ikarus bus on the route Chernivtsi - Uzhhorod.

Sometimes the track runs parallel to the road...

... which brings us back into the train nowadays.
At Laseshchyna the line leaves the vicinity of the main road in a horse shoe curve through a side valley. Then the pass is crossed though Yablonitsky-Tunnel, the former border within the Austro-Hungarian Empire between Hungary (county Máramaros) and Austria (Galicia). At following mountain station Voronenko the train was boarded by youth groups, some girls climbed onto the berths above.

We reach winter resort Vorokhta and cross Prut River for the first time on a large bridge. I took this picture in front of the giggling girls, then the train became so full it was impossible to film anymore. Yaremche was close, and the question arose: how do I get out of here with my large backpack? 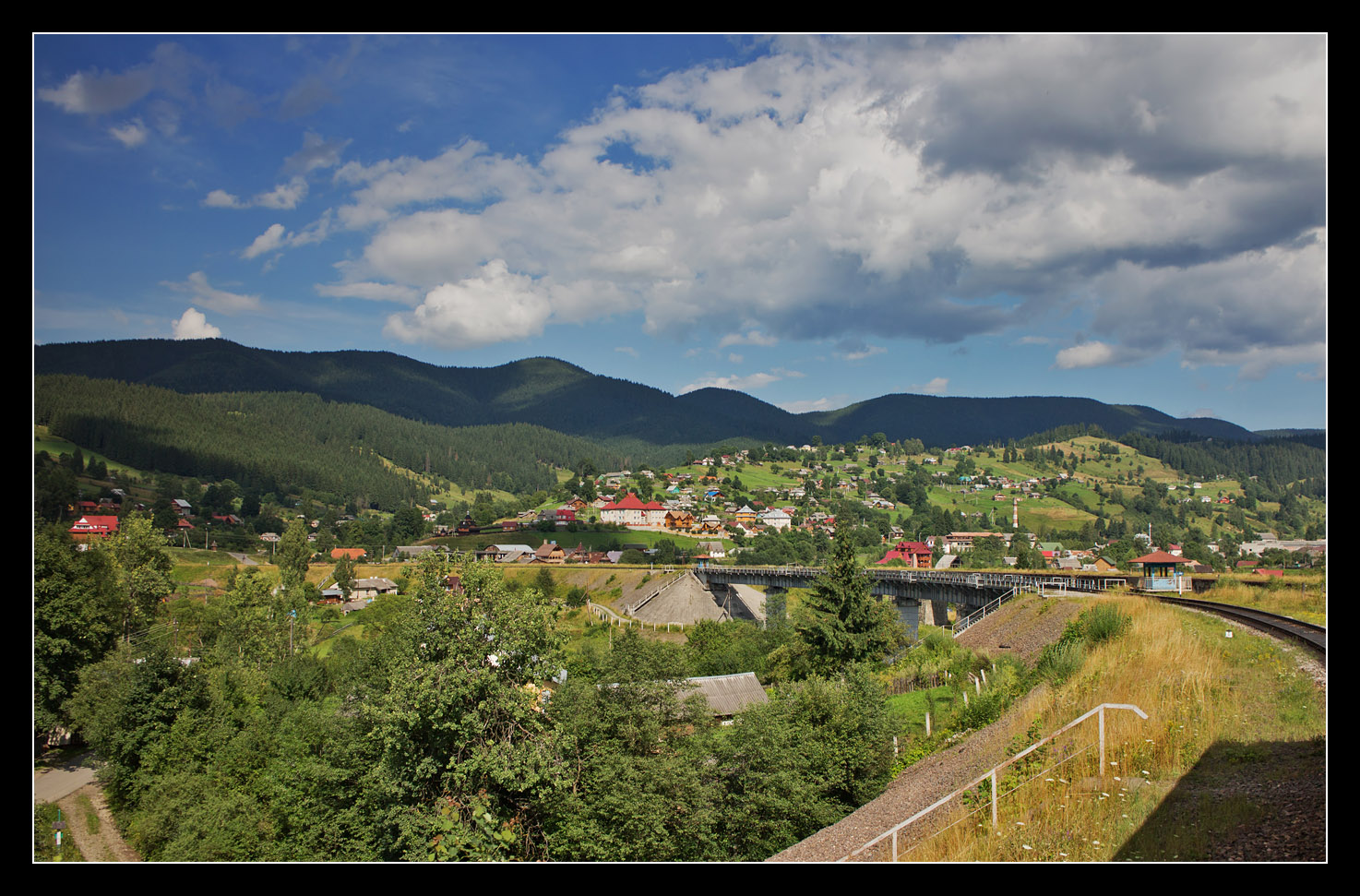 Shortly before arrival I headed towards the exit and first had to squeeze through the narrow corridor between the open compartments where already many people were standing. Of course the only open door was situated at the other end of the coach. Outside on the platform, a cluster of people had formed, the passengers getting out left behind an open passage through the crowd. When I was out, suddenly everyone pushed towards the door, the passage became narrower and narrower, and I got stuck with my backpack. The only possibility was to shout at the people to stop. I managed to escape the claustrophobic situation, but it was a small taste of how uncontrollable the force of a crowd can get in an instant.

Finally free, the rest of the travellers took ten minutes to board instead of scheduled five. 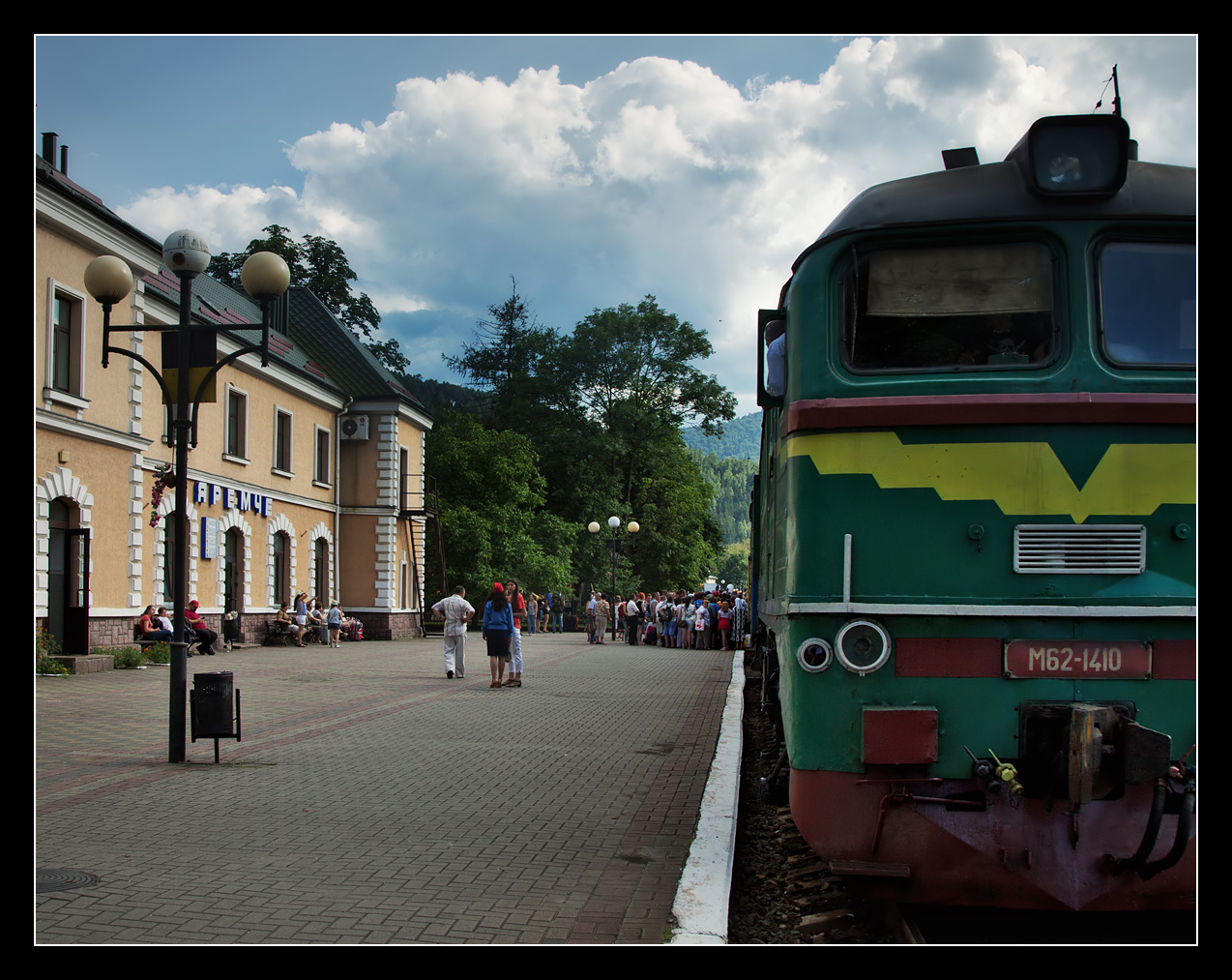 This is a mass tourism town, people walked by from all directions. 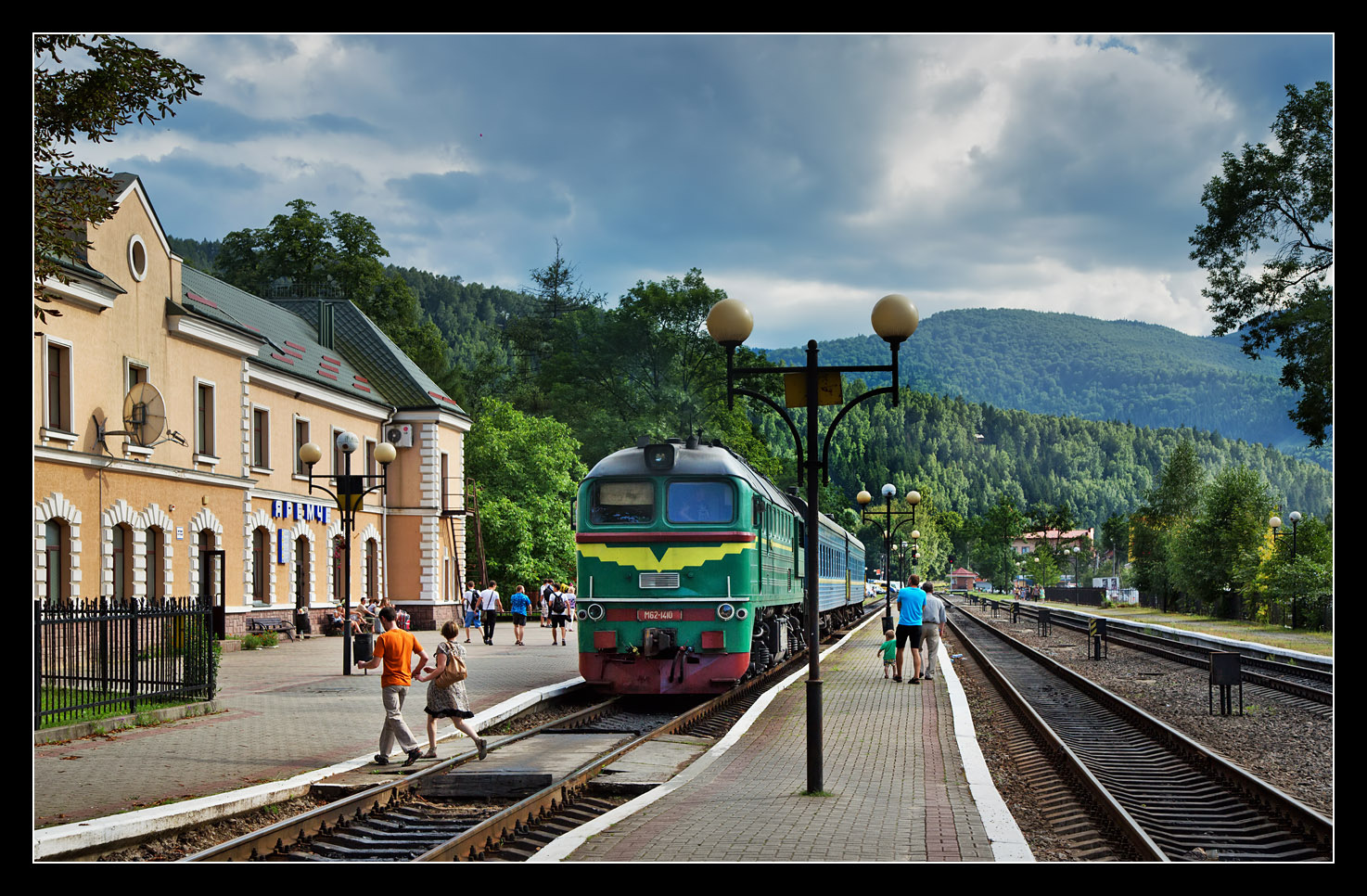 At least the departure was delayed so the sun came out again. Over the Carpathians often thunderstorms form on hot summer afternoons. 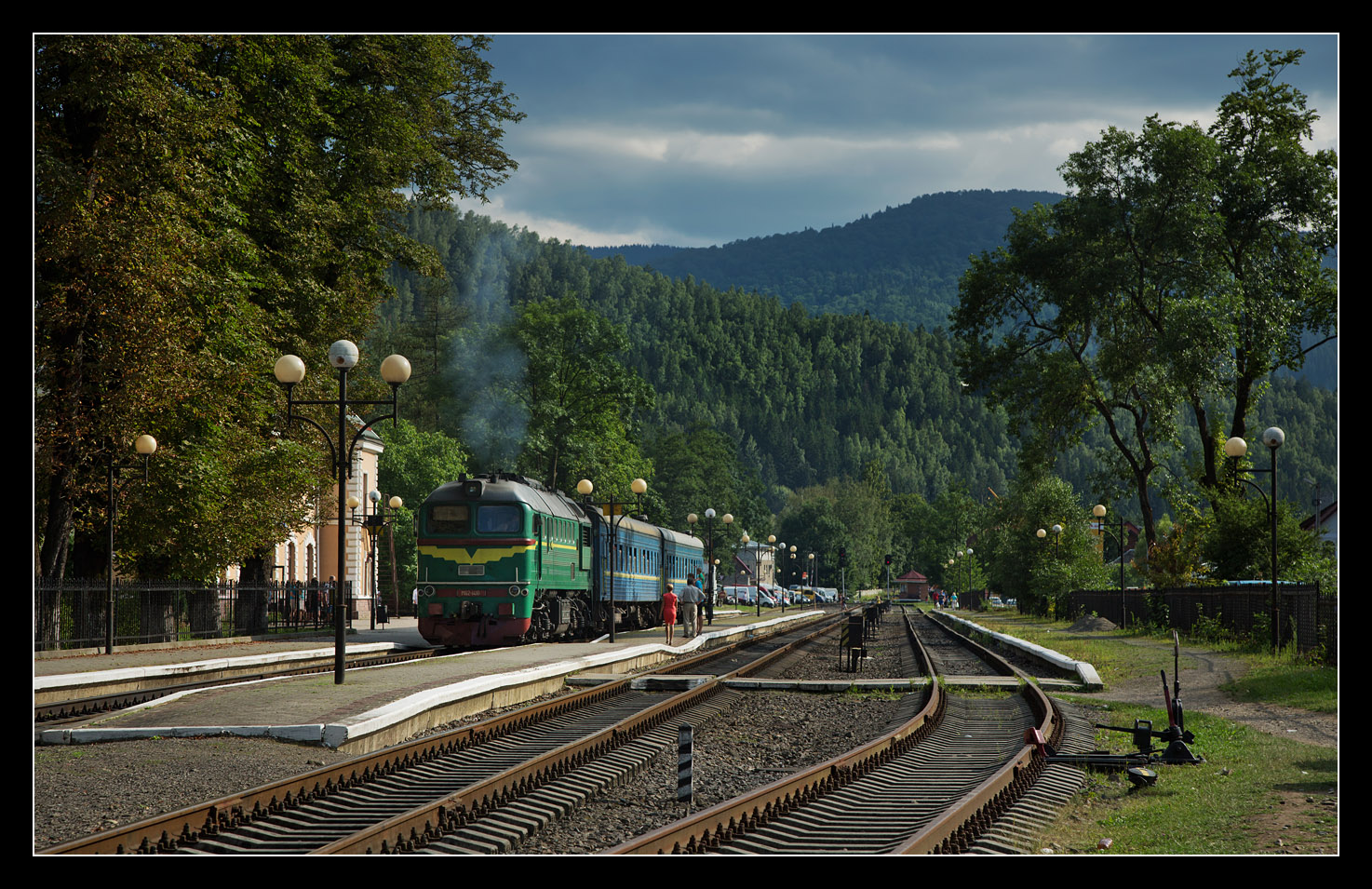 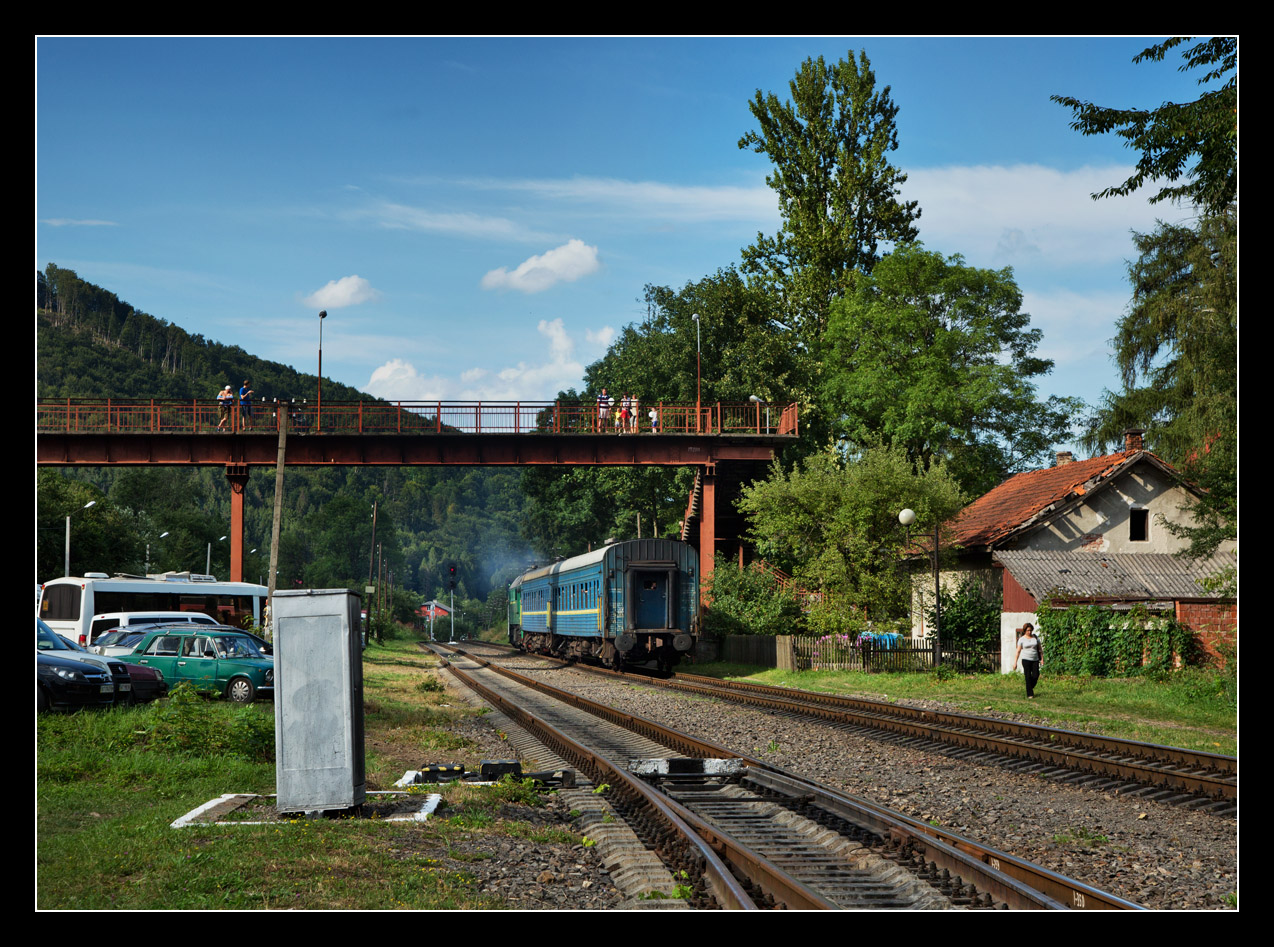 Next I thought it was possible to shop conveniently at the supermarket across the street - not counting on a continuation of my claustrophobic adventure. The aisles inside were so tight, I hardly fit through carrying my rucksack. In the final one they even had stacked up crates of beer to make it narrower, so in the end I had to walk out backwards not to get stuck. At least I managed to buy necessary supplies, then only walked five minutes to my hotel.

In the morning at half past seven I left my hotel "Velyka Vedmedytsya"("Big She-Bear", also the Ukrainian name for Ursa Major) - it can only be recommended. But plenty big tourist-bunkers also are on offer. 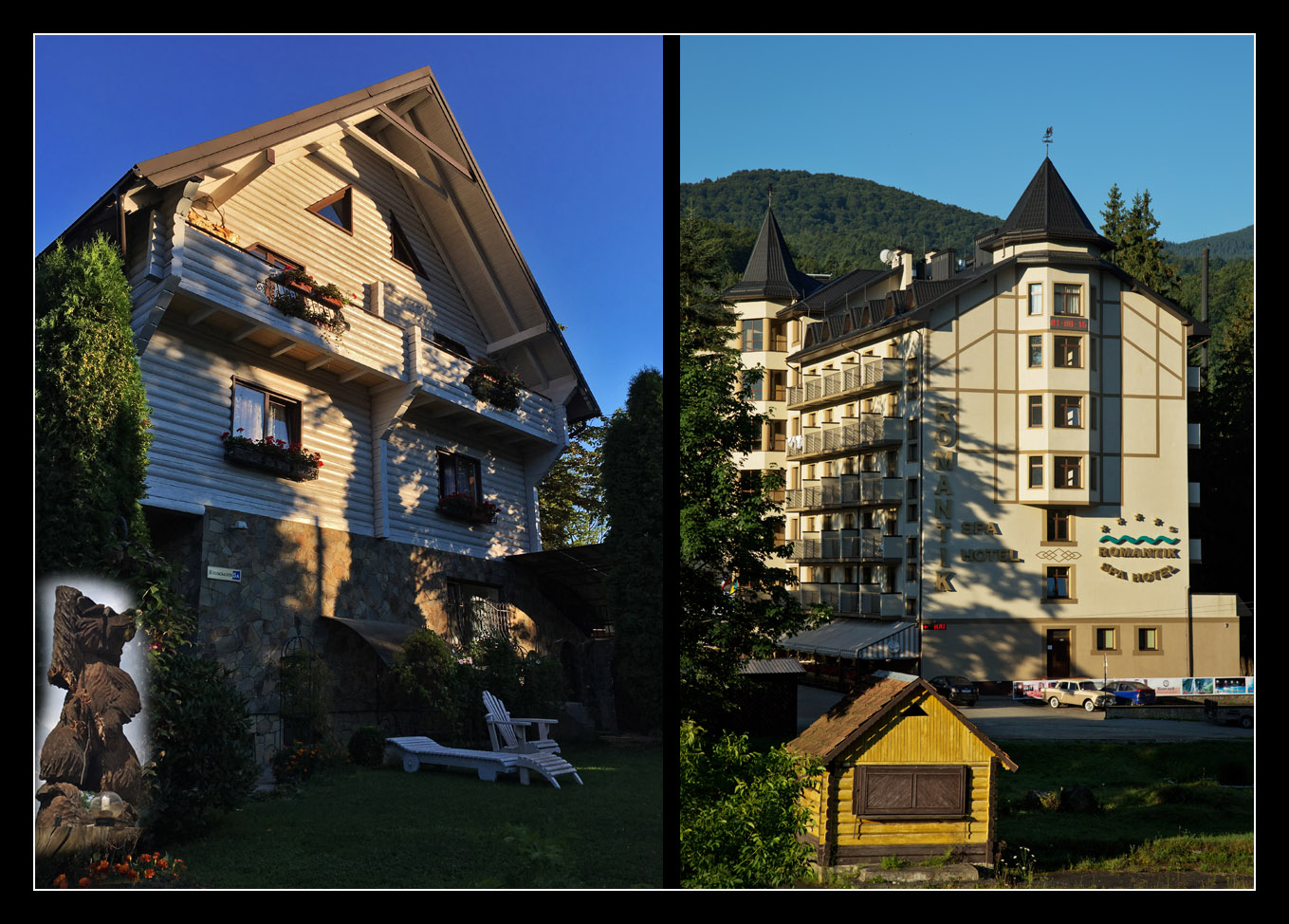 I walked four kilometres along the main road featuring a pavement throughout. 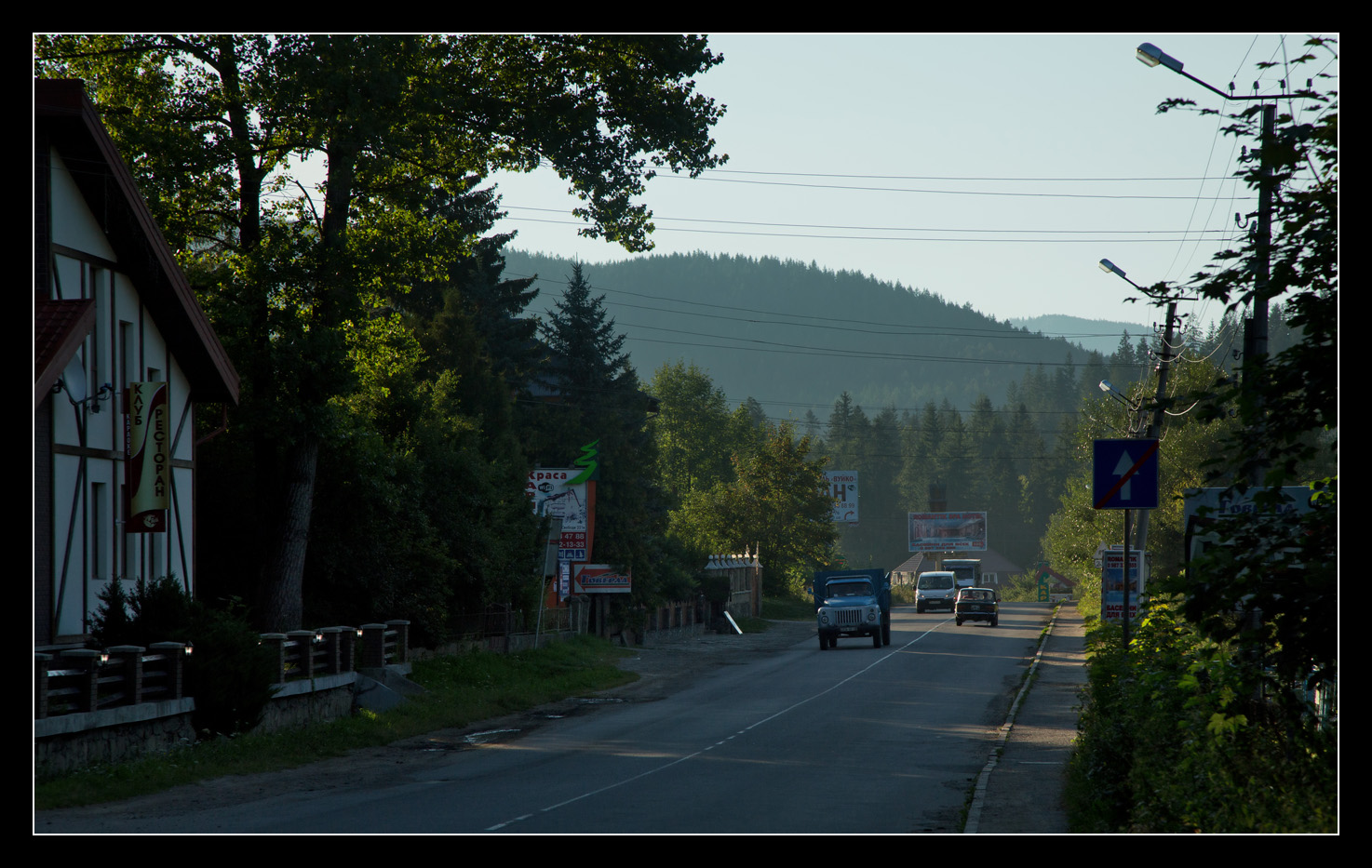 Church of John the Merciful at Yamna. 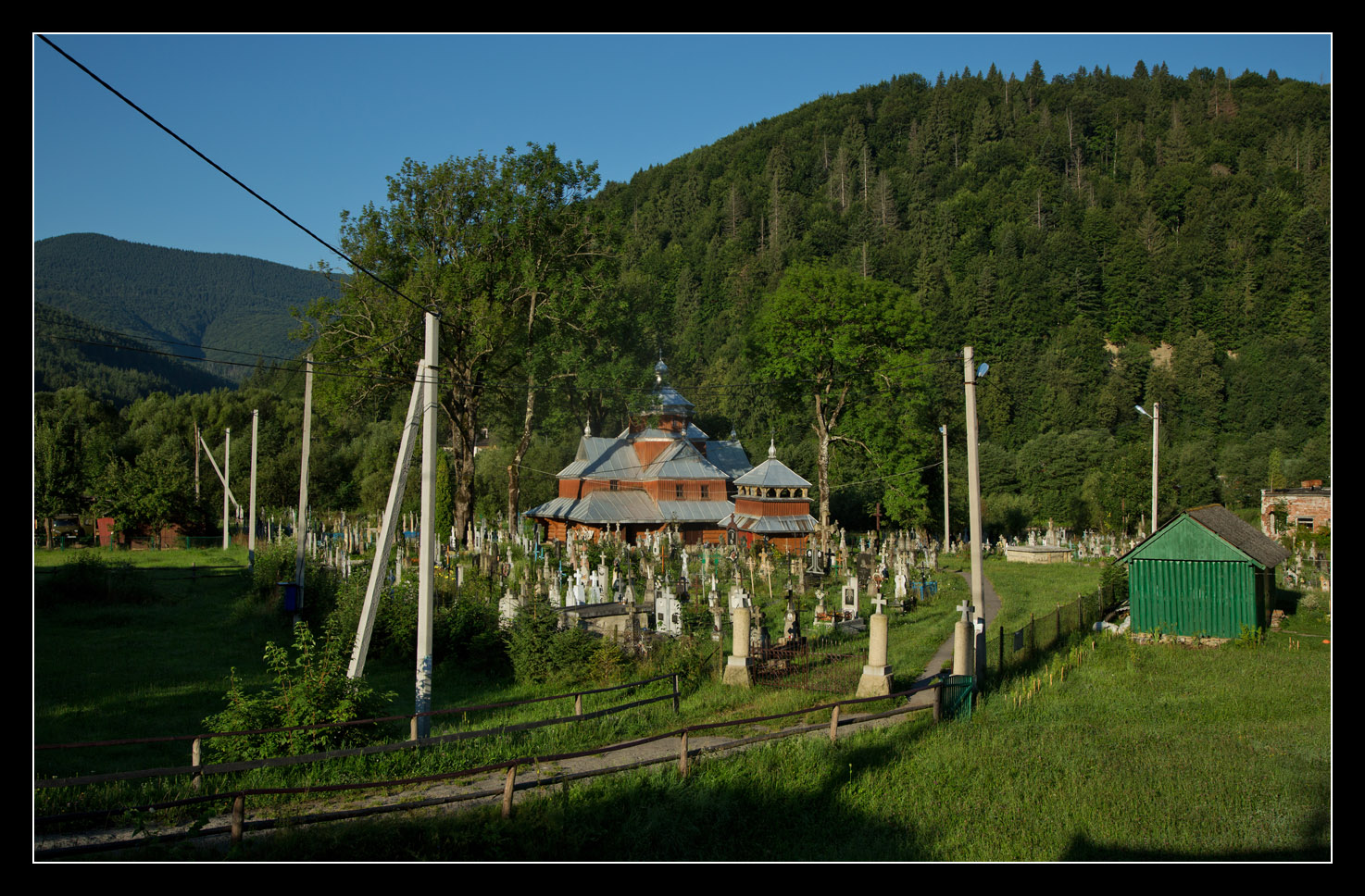 Prut River in the morning.

The bridge was decorated by something Olympic-ring-like. 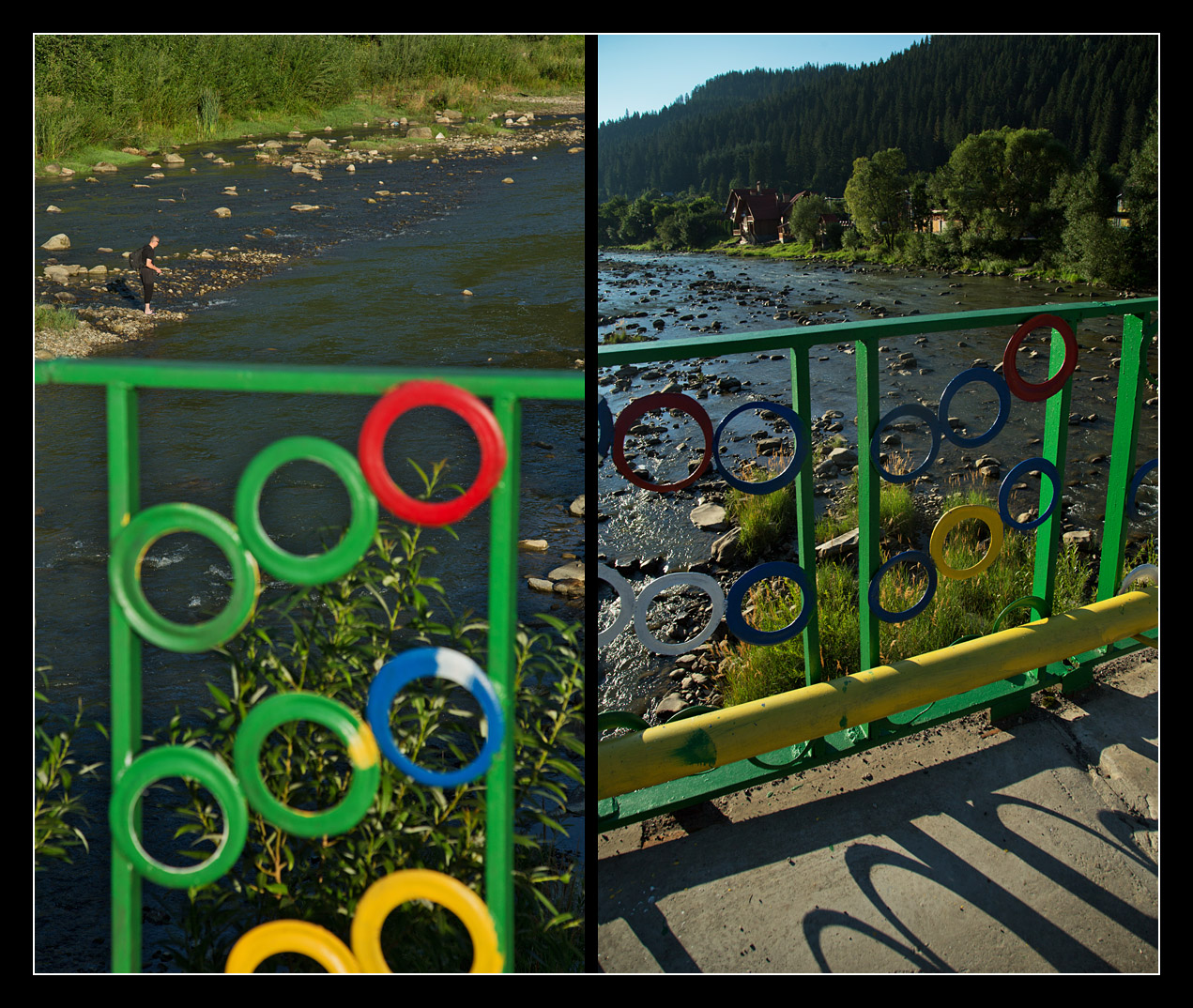 I followed the unpaved road past wooden holiday homes. It had recently been renamed as "Street of the Maidan Heroes" like so many in Ukraine. I reached Yamna halt next to the level crossing.

Who would win this staring duel? Of course the jay. 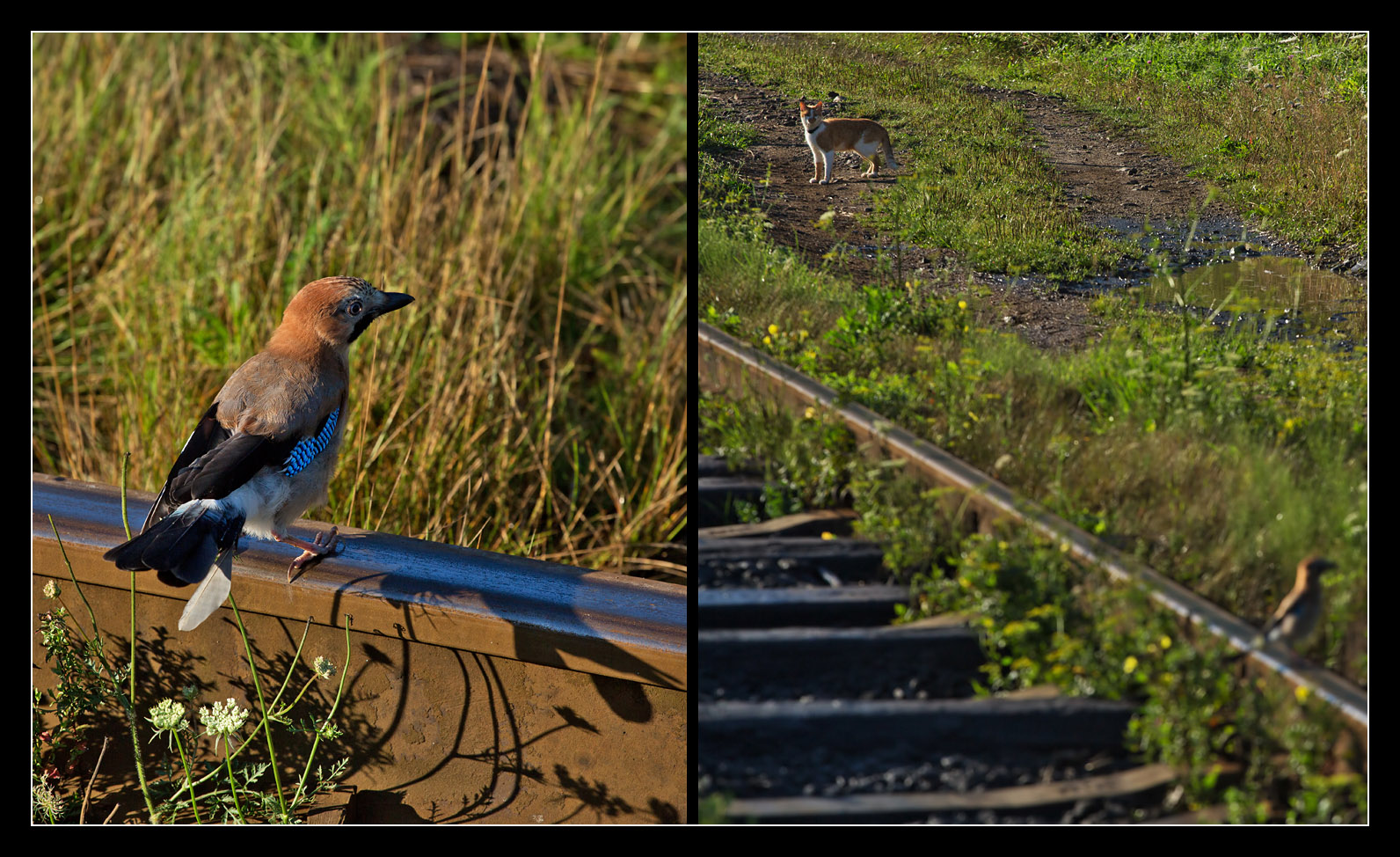 Wonderful telegraph lines have been preserved along most of the line. 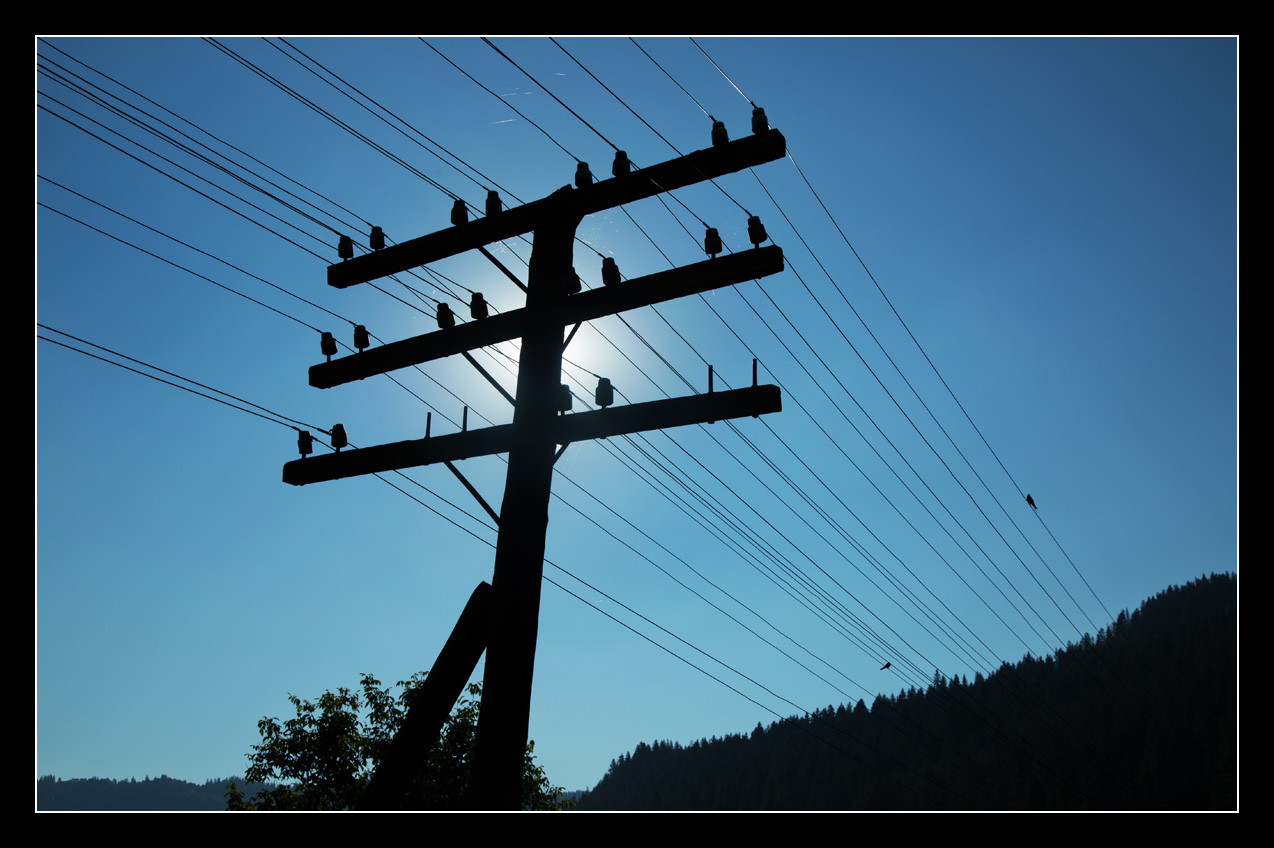 I waited for a while, the thing I was waiting for already was overdue. Suddenly a monstrous old logging lorry loudly crept up from behind and stopped in front of a nearby house. Two men jumped out, one of them seemed to be a uniformed soldier. Oh no, I thought - ah well, if someone is asking, I am just waiting at the halt for the local train (still an hour away). I am not sure what was happening, a compressor was running, obviously something either was broken or just regularly had to be recharged. Minutes were passing slowly - then finally the engine of the monster started again. As they drove by, I waved as friendly as possible - the soldier looked at me very sceptically, but waved back in an almost saluting fashion. The truck wobbled along the Heroes' road, across Prut bridge - and finally, as it was out of sight, another - now diesel-electric - sound filled the valley... 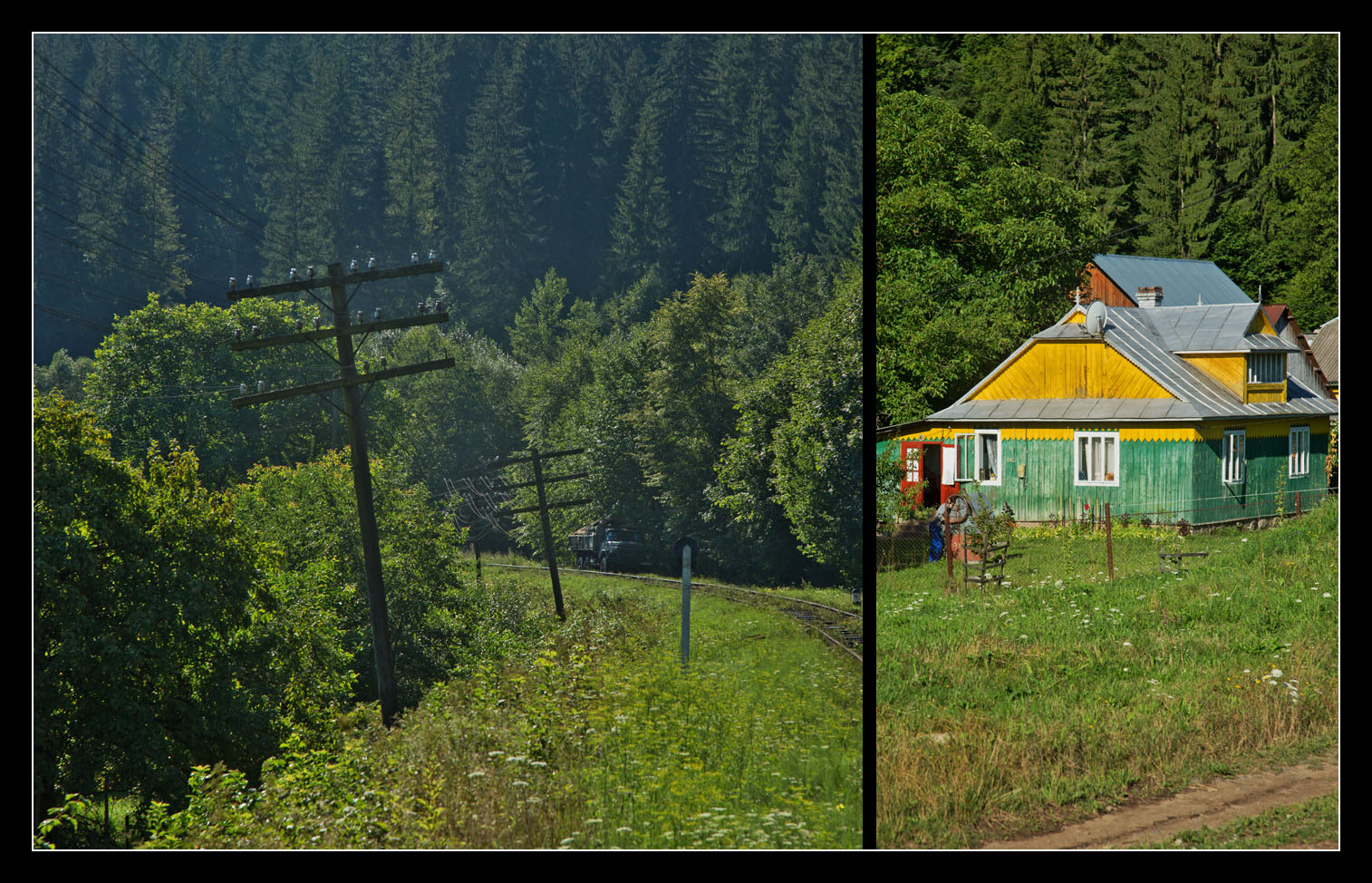 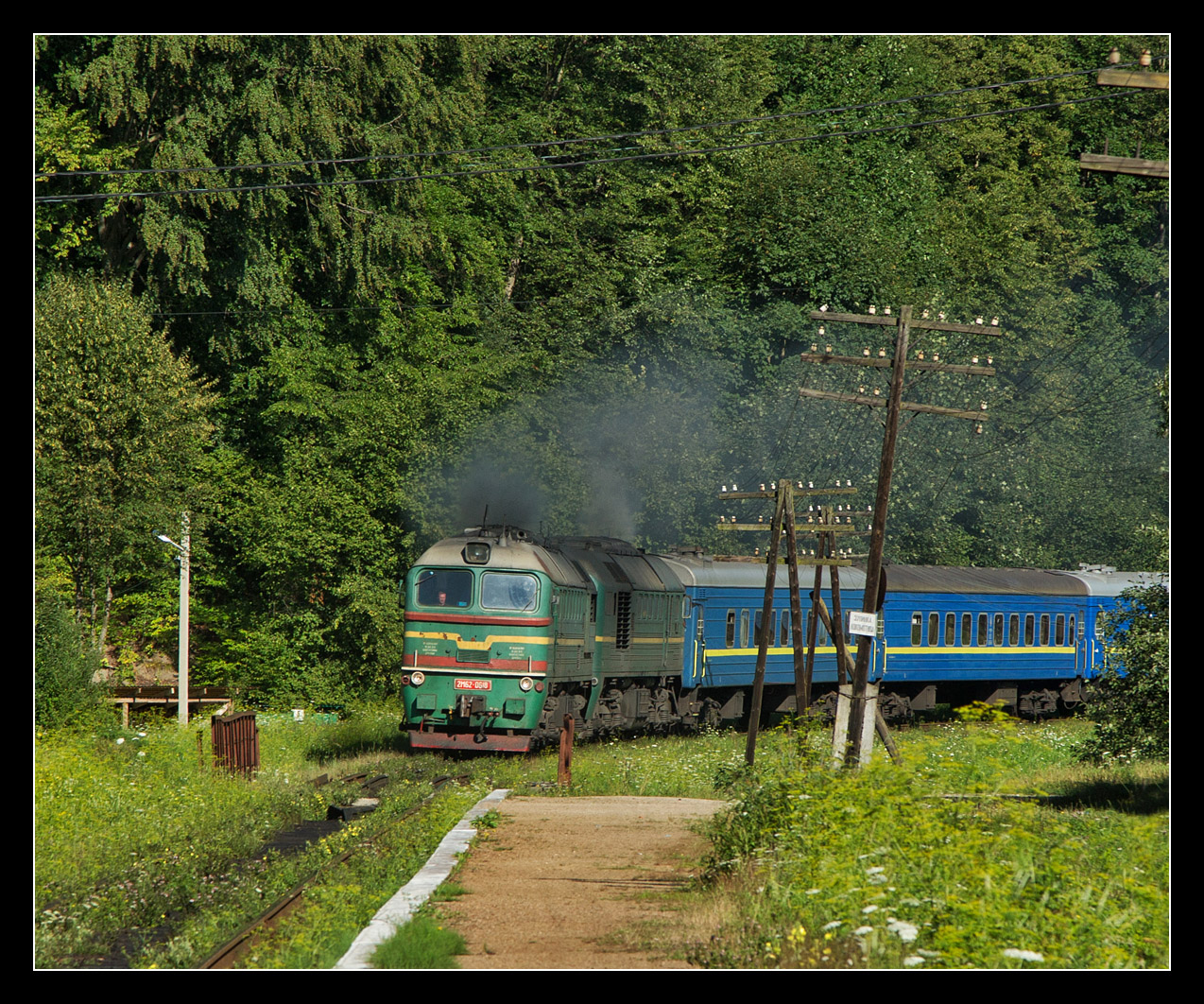 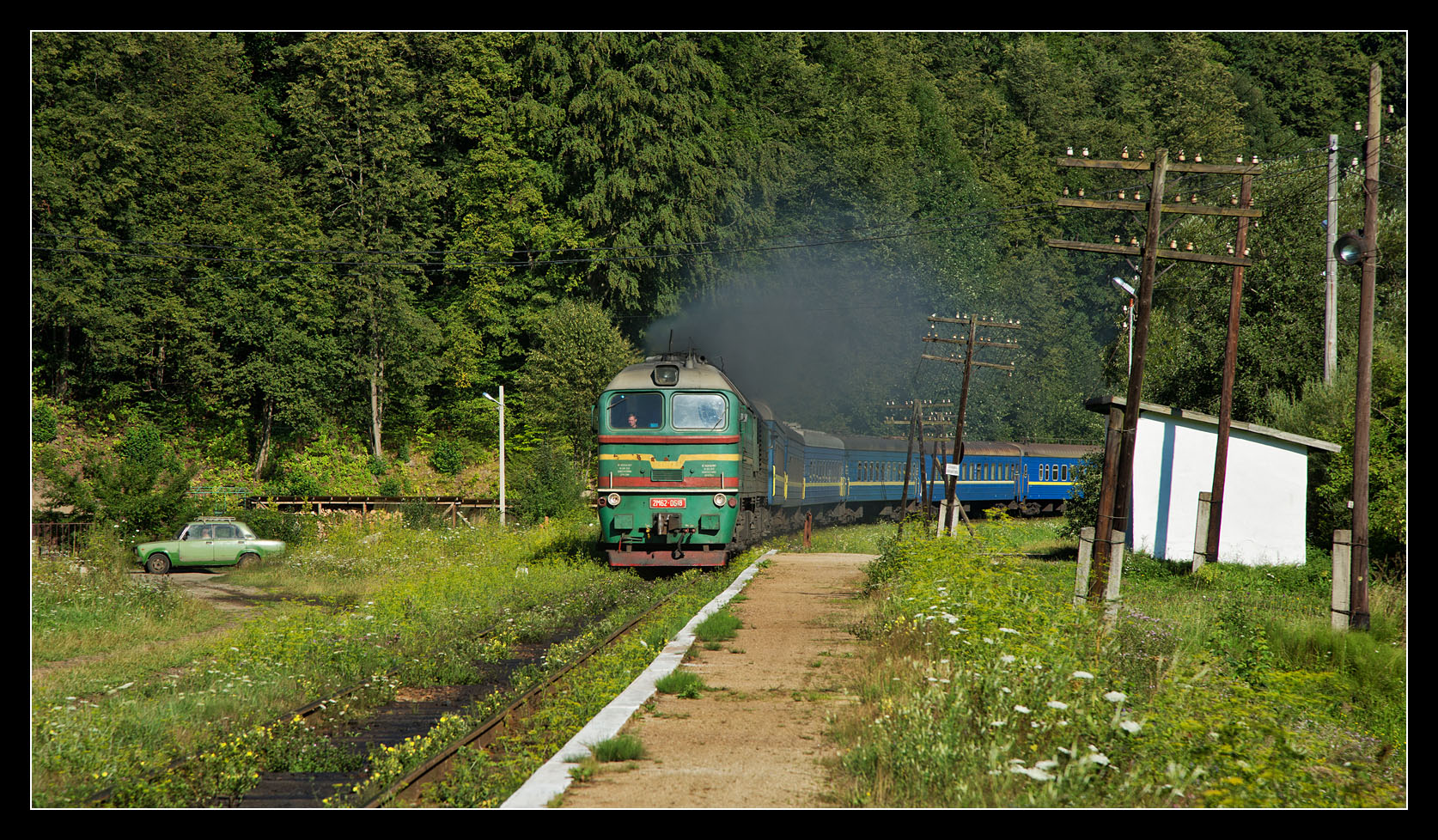 A retreat run by the Orthodox Church in the background. 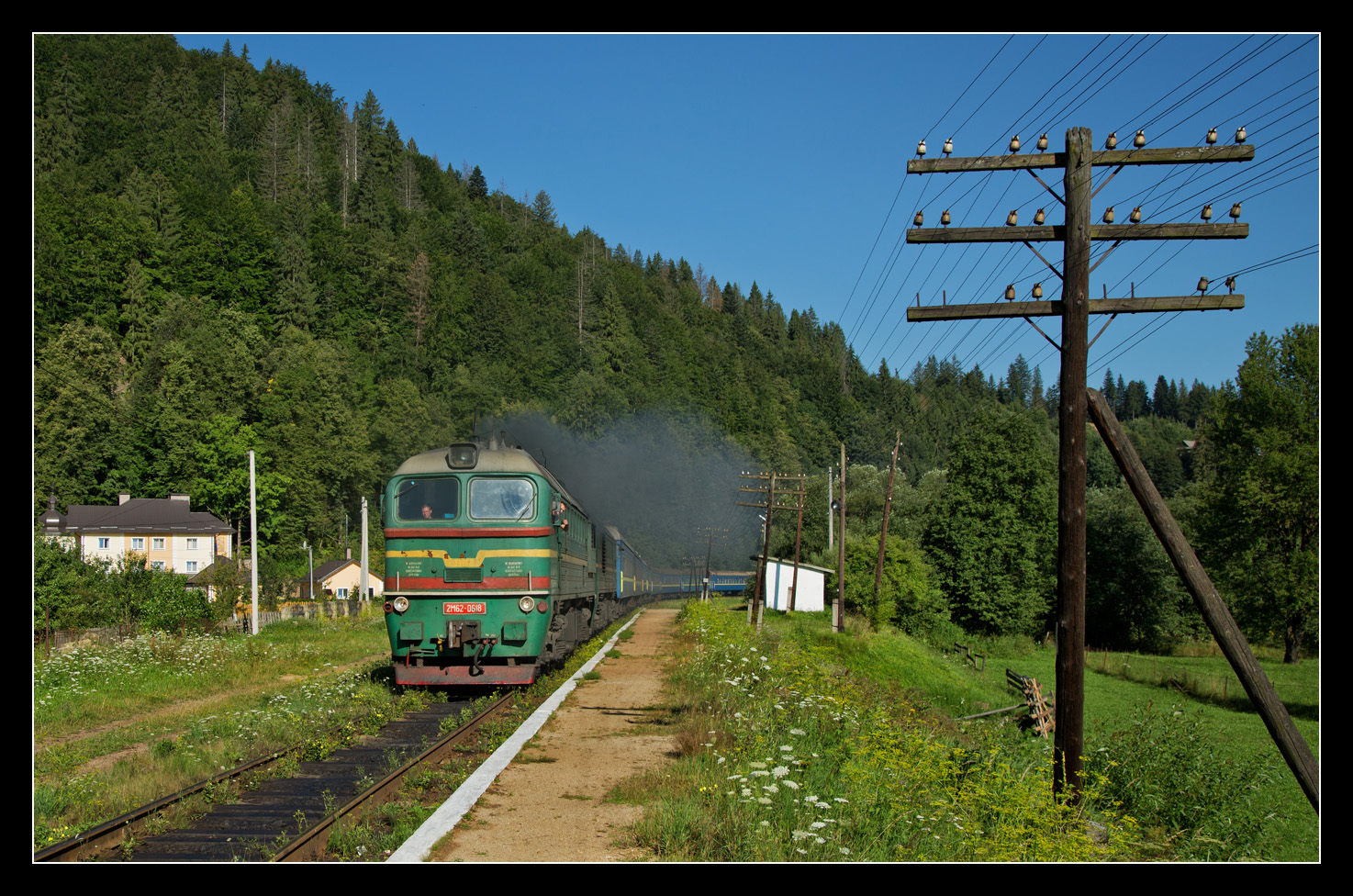 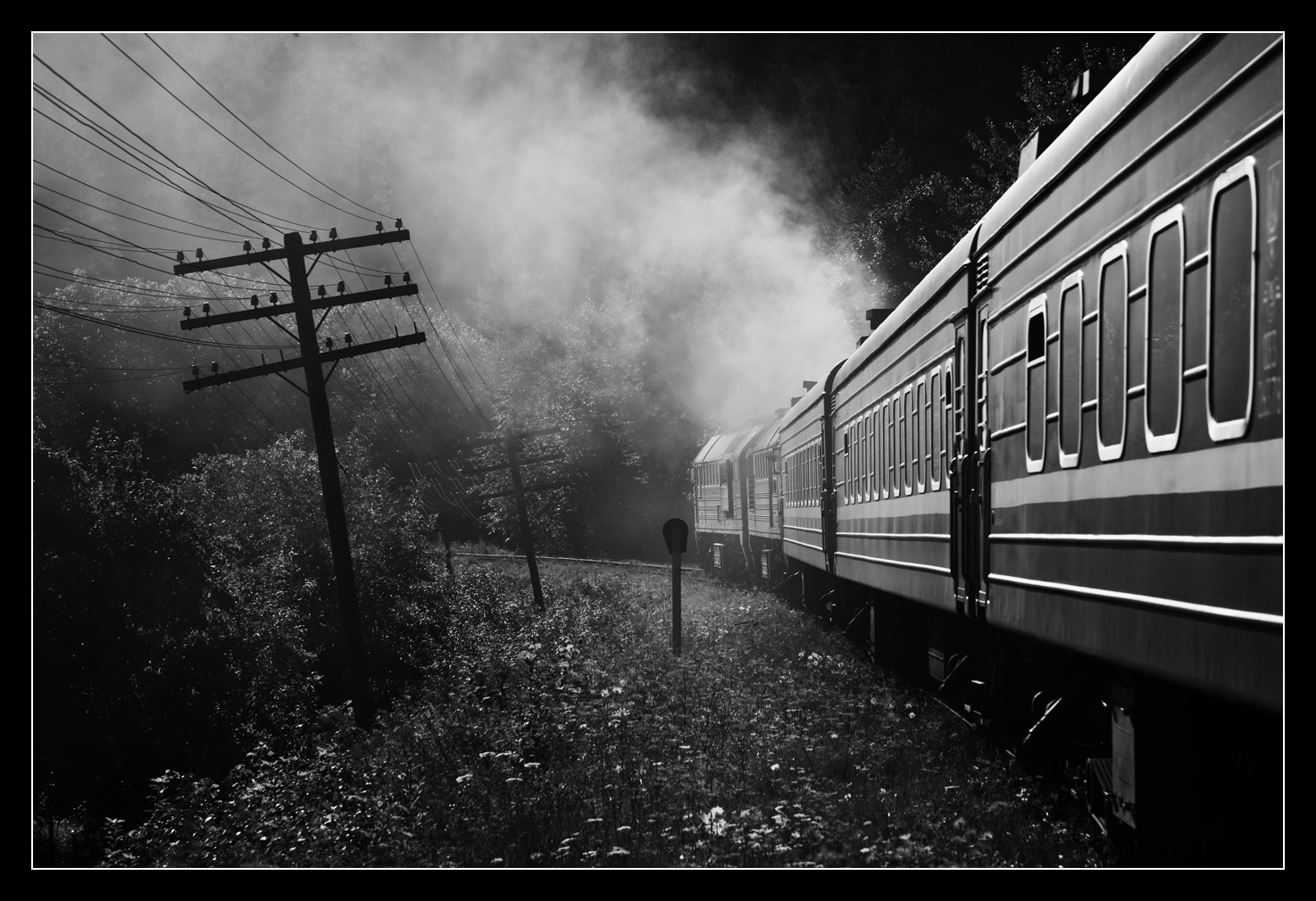 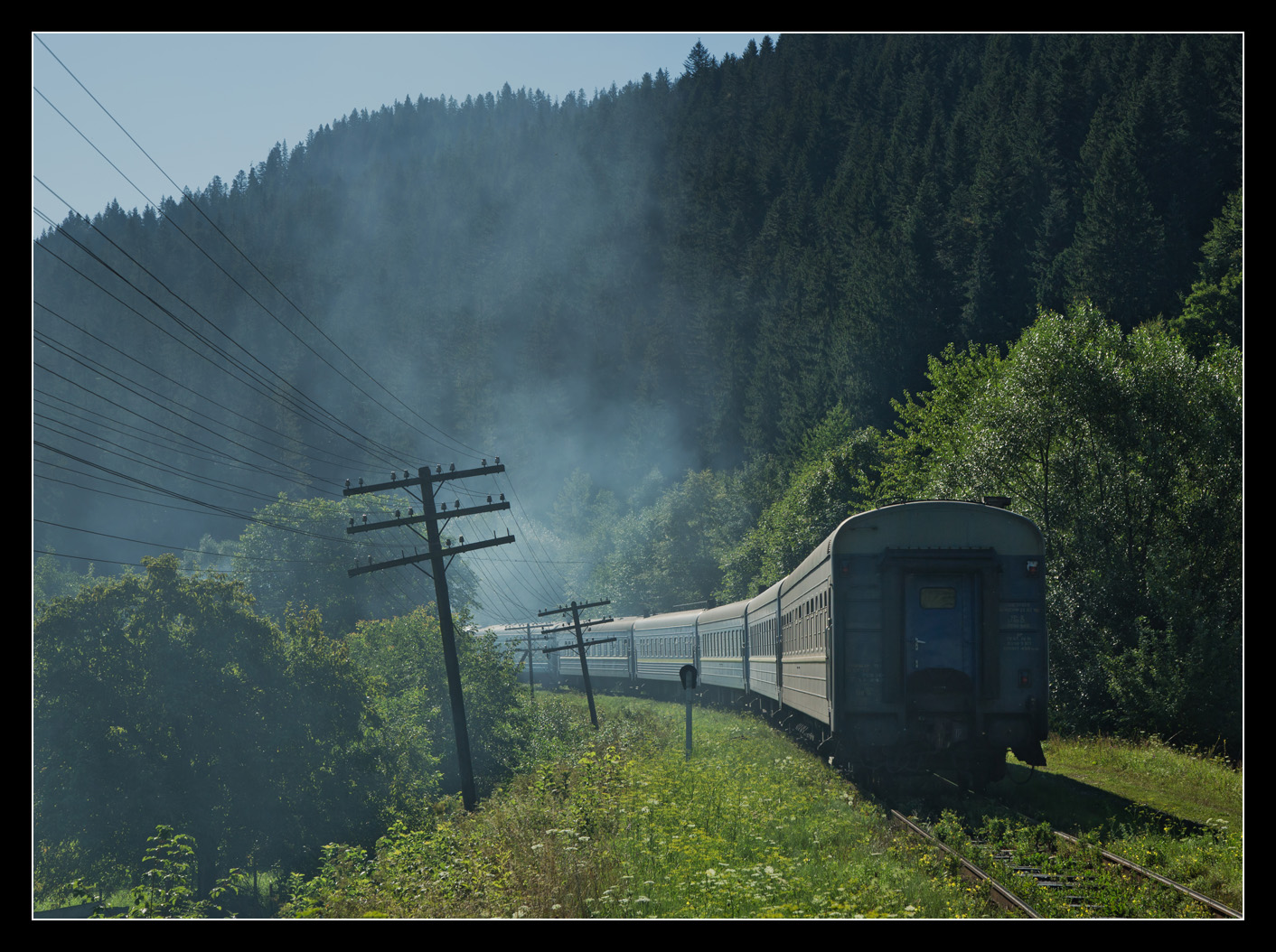