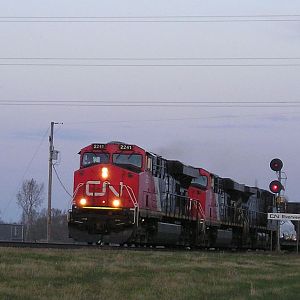 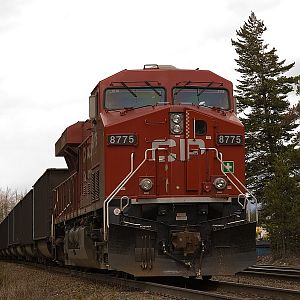 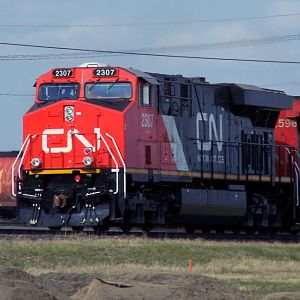 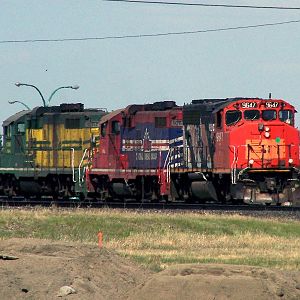 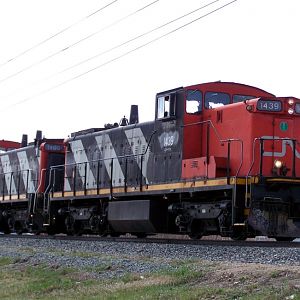 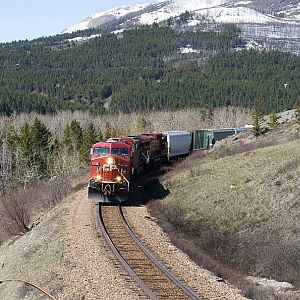 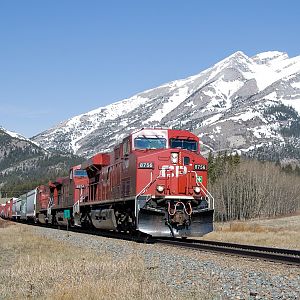 Originally Carlton Trail was powered by ex-CN M420W's and a couple BCOL's (including a B unit!) thrown into the mix. Up to six would be put on a grain train to struggle through the hilly terrain (Northern SK is not like South SK). Today HBR and other shortlines took all the MLW's away, leaving CTRW with an assortment of ex-IC GP10's and ex-CN GP40-2LW's. All three paint shemes are present in this lash-up.

CTRW 771 is in town to pick-up a grain train to take back to Prince Albert. Hard to believe that they ran light like this for 95 miles, but stranger things have happened. The story I hear (from another railfan) is that CTRW always runs from Prince Albert to Warman, where CN lifts the load and takes them into Saskatoon, only 17 miles away. However if CTRW has a big train, hence Warman yard is full - CTRW runs south to Saskatoon.

You can see the train turning away from the &quot;old mainline&quot; this photo. This is a result of a 1960's detour that saw CN's yards and station moved out of the downtown (including 6 miles of North/South trackadge). A small yard still remains there, servicing a couple industries and functioning as the CP interchange.
Click to expand...
Congratulations, Roman! Good catch. The heat-wave effect lowers the image clairity, though. Do you think 1he 1004 will lead the 772 out?
CTRW 1004 should definetelly be leading, unless CN turns the power at the wye, in that case the HLCX ugly will lead N/B as well. He led two other items I've seen CTRW 772. The heat effect is real bad actually. Not sure why, as it was only 15C when this photo was taken. I purposely stood so that I could get a &quot;head on&quot; shot when the power was coming on the wye. I got the photos, but they're so blurry, it looks like they were painted with a brush. Oddly I don't remember it getitng any worse once 35C hits.
Ok i might be goin to PA in the summer since my cabin is at Wakaw Lake on the Cudworth Sub but anyway is Pa there big place for locomotives. The CTRW is on my list of railroads right after is the Great Western Railway
Realisticvally all you can see there are CTRW 1020 &amp; 1040 (in the gallery), which are derelict hulks. Been to Wakaw Lake, great place - should be back this summer on my trip to see Torhc River Rail &amp; Thunder Rail, possibly PA as well.
You know its funny, I've never seen that GP40 in town, I only see the two gp10s coming back after a S'toon run. Perhaps its stored in Warman?
No, there's nothing stored in Warman. CTRW simply did a swap with HBR, trading their 5 ex-CN GP40-2LW's in exchange for 5? GMTX GP38-2's that HBR was leasing.
ok, do you still see that engine come in with them when they arrive, because I've been watching the trains come into town and that GP40 isn't there and it isn't in the roundhouse
Like I said, its been traded, i.e. he is in The Pas, MB now. Similarly the GMTX GP38-2's were working there before coming to Meadow Lake.